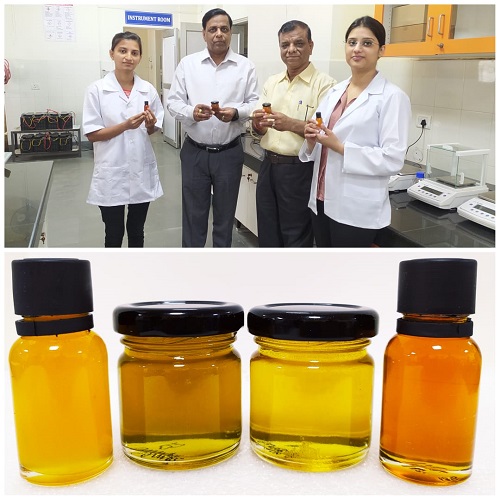 Sweet Sorghum stalk generally is being used as fodder for livestock can now be used for producing “Natural and Healthier Sugar Syrup” comparable with honey. National Sugar Institute, Kanpur earlier conducted trials on production of ethanol from its juice successfully. While studying the quality of juice from it, the research workers of the institute observed sugar profile to have presence of fructose, glucose and sucrose for its possible conversion to “Sugar Syrup” resembling honey. “Natural & Healthier Sugar Syrup from Sweet Sorghum” which to a certain extent resembles “Honey” can make a huge difference in the sweetener world. Such sugar syrup is considered to be of immense utility for the beverage, confectionary, sweets and bakery sector which will get rid of cumbersome operation of dissolving the crystalline sugar before application. Side by side, it is expected to cost less as the raw material is cheap and unit operations of first making the crystalline sugar and then dissolving it are avoided.

National Sugar Institute, Kanpur was working on it from last two years and with due efforts of Ms. Anushka Agarwal of sugar technology division ably supported by Ms. Shruti Shukla developed this attractive sweetener “Natural & Healthier Sugar Syrup” said Prof. Narendra Mohan, Director, National Sugar Institute, Kanpur. The process comprises of juice extraction using extractor made of stainless steel, micro-filtration, clarification through use of organic clarifying agents, de-colorization through ion-exchange resins and concentration through boiling under controlled conditions, said Ms. Anushka Agarwal. From the time sweet sorghum is harvested from the field to the time it is processed into “Sugar Syrup”, the process technique has been developed under the watchful eyes of the institute Director, Prof. Narendra Mohan.

The “Sugar Syrup” so produced from sweet sorghum stalk besides containing protein, essential amino acids, minerals etc. which are originally present in the crop, also contains fructose, glucose and sucrose in the range of (34 – 36%), (29 – 32%), (6 – 7.5%) respectively and has a total energy value of about 296 kcal/100 g as compared to 400 kCal/100g of sugar and about 325 kCal/100g of honey, thus, expanding its boundaries to be used as healthier sweetener alternative. This product has a lower water activity that lie in the range of intermediate moisture food (IMF), such combination of lower water activity and acidic pH food serves to have a stable shelf life and can be stored up to a year under ambient temperatures up to 35 deg. C or even more with no use of chemical preservatives. Since the sugars are mainly glucose and fructose, the problem of re-crystallization upon storage is ruled out. We have also observed the fructose:glucose ratio (F/G ratio) to be comparable to that is observed in Honey, said Prof. Narendra Mohan.

This one-of-a-kind “Sugar Syrup” has an aroma & taste that is more earthy and has a glossy finish which may attract its application in beverages, sweets, confectionary, barbecue marinades, salad dressings, granolas, cookie manufacturing and many more.