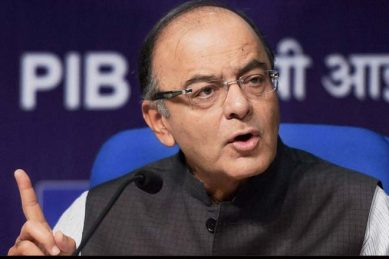 Finance Minister Arun Jaitley Tuesday made a case for blending subsidy with investment to augment farm sector growth and make it sustainable and self-sufficient. He also said formalisation of the economy has started showing visible result in terms of higher resource mobilisation, leaving more in the hands of the government for the capital formation in various sector.

“There is lot of formalisation of economy taking place in several other sectors… We can see visible results, and it is leading to additional resources in the hands of the government. I don’t think this process will now be reversed,” he said. As India moves into the situation where governments have more resources, the ability to spend on sectors, which needs maximum support, will obviously rise, he said after releasing a book titled Supporting Indian Farms the Smart Way. Important areas which require investment include physical infrastructure, social sector and farm sector, he said. “As resources grow, the capital and development expenditure will increase.

Hopefully, the resource crunch to spend in these areas will not be there. This has encouraged us…the government year after year has taken conditional steps in order to make investments in agriculture in terms of subsidy support, price support, crop insurance support or the interest subvention support. “I do see a point on blending the subsidy support with the investment because, to have a model which sustains indefinitely only on subsidy will not be a sustainable model.

Investments will make farm sector self-sufficient on ground. With much lesser subsidies a self-sufficient farmer may be able to serve the cause of Indian agriculture much better,” he said. Talking about the growth, Jaitley said India has grown at reasonable pace in the last quarter century. “We have now acquired position when we are growing much faster than the rest of the world and hopefully there are various avenues of further generating this growth.
There are regions in the country that have not grown well in the past therefore there is lot of potential for growth,” he said. Observing that public discourse occasionally gets impacted by populism, he said, good politics has to be blended with sound and rational policy.