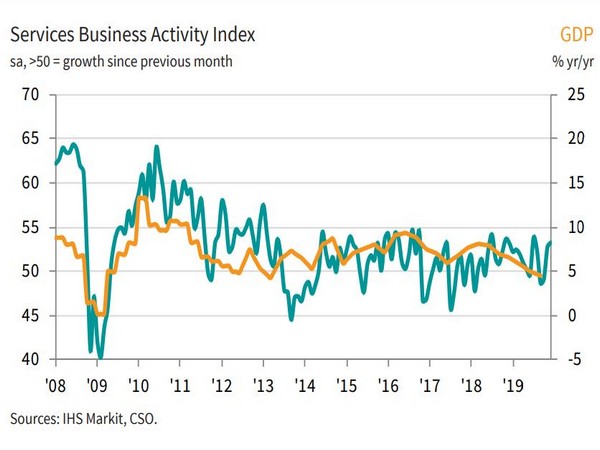 A marked and accelerated upturn in new work intakes boosted the growth of output and employment while supporting an uptick in business confidence. But worryingly, inflationary pressures intensified with the fastest rise in input costs for almost seven years, pushing output charge inflation to a 22-month high.

The IHS Markit India Services Business Activity Index improved from 52.7 in November to 53.3 in December, highlighting the second strongest rate of increase in output in over a year behind July.

Survey members linked the rise to better market conditions and new business growth. Total sales expanded for the third consecutive month at the end of the year and at the quickest pace since October 2016.

Where growth was recorded, panellists commented on improved business decisions at the managerial level, the offering of new services and better underlying demand.

The upturn in total new work was achieved with the support of international markets with services exports rising for the tenth straight month in December. Although moderate, the pace of growth accelerated to the fastest since September.

Amid reports of new business growth, service providers continued to hire extra staff in December. Employment increased for the 28th month in succession and at a rate that, although modest, was the quickest since August.

“It is encouraging to see the Indian service sector continuing to recover from the subdued performances noted in September and October,” said Principal Economist at IHS Markit Pollyanna de Lima.

“More importantly, the news of sustained job creation, robust new order growth and a pick-up in business confidence suggest that expansion can be maintained in the early part of 2020,” she said in a statement.

Despite ongoing job creation, December data pointed to further capacity pressures at services companies. This was indicated by another monthly increase in outstanding business.

That said, the pace of backlog accumulation was only slight and broadly in line with the long-run series average. Input costs increased further in December with monitored firms citing higher charges for food, fuel, medical products and transport.

The overall rate of inflation was sharp and the fastest in just under seven years.

Meanwhile, the Indian private sector economy moved further away from the weakness recorded earlier in the quarter with business activity rising for the second month running in December and at the quickest pace since July.

The Composite PMI Output Index was up from 52.7 in November to 53.7, reflecting stronger rates of expansion in both the manufacturing and service sectors.

One factor supporting the uptick in output growth was a faster rise in aggregate new orders, the joint-strongest in over three years. Rates of increase in sales picked up among goods producers and service providers.

Private sector jobs expanded for the 29th month in a row during December and to the greatest extent since August. The rise was broad-based across the manufacturing and service categories.

The IHS Markit India Manufacturing PMI is compiled from responses to questionnaires sent to purchasing managers in a panel of around 400 manufacturers. The panel is stratified by detailed sector and company workforce size, based on contributions to GDP.