Home All News Notices To Sugar Mills In Maharashtra Over Rs 1,200 Cr Dues 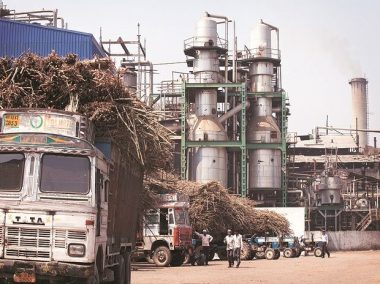 Mumbai, Sep 16 (PTI) The Maharashtra government has issued notices to co-operative sugar mills in the state which have defaulted on repayment of loans worth over Rs 1,200 crore taken by them, an official said.

Some district central cooperative (DCC) banks in the state are facing a financial crisis due to non-repayment of loans given to cooperative sugar mills controlled by leaders from the opposition Congress and the NCP, he said.
State Finance minister Sudhir Mungantiwar has also directed the co-operative department to come up with a ‘white paper’, listing the loans taken by these cooperative institutions and the amounts re-paid so far.

A senior official from the co-operative and marketing department told PTI that five DCC banks are in a financial crisis after lending money to 11 cooperative sugar mills controlled by “big” leaders from the Congress and the NCP.
These banks are in Solapur, Wardha, Nashik, Buldhana and Osmanabad districts.

“Sugar mills have not repaid loans worth Rs 1,223.93 crore taken from the DCC banks. These banks are now having liquidity issues and even faced action from the Reserve Bank of India,” the official said.
He said the department will publish a white paper, giving details of how much money these cooperative institutions have taken as loans and share capital and the total amount paid back.

“There are several such cases. When we came to know about this tactic, we paid rest of the share capital to all co-operative sugar and textile mills. Now we have started asking them for repayment,” the official added.

“Sugar and textile mills have taken soft loans from the state government and not paid them back. The Congress and the NCP ruled the state for maximum number of years. They also controlled the cooperative sector and delayed repayment of the loan amount and its interest. People should know the truth how they have looted state funds,” Mungantiwar said.
However, Congress spokesperson Sachin Sawant said the decision to publish the white paper shows desperation of the BJP as its governance has “failed” on all fronts.

“They want to tarnish the Congress’ reputation. They know they will be out of power in the forthcoming polls. The co-operative sector has immensely helped the state’s economy.
People got benefits due to the co-operative movement started by the Congress,” he said.

Accusing the BJP was playing “vendetta politics”, he said publishing the white paper will be a “prejudiced” action.
“No party has dominated the sector. People who are associated may be from the Congress but their association is individual. The BJP should refrain from making wild allegations,” Sawant said.

NCP spokesperson Nawab Malik said the BJP and the Shiv Sena are in power for four years now and they could have released a white paper all these years if they found discrepancies.

“Before releasing the white paper, all baseless gossips should be stopped. They are not in opposition anymore.
If there have been wrongdoings in the last four years, why the white paper was not released till now?” Malik asked.
He said the government wants to hide its own failure – of the state’s ruined economy, the plight of farmers and unfulfilled promises.