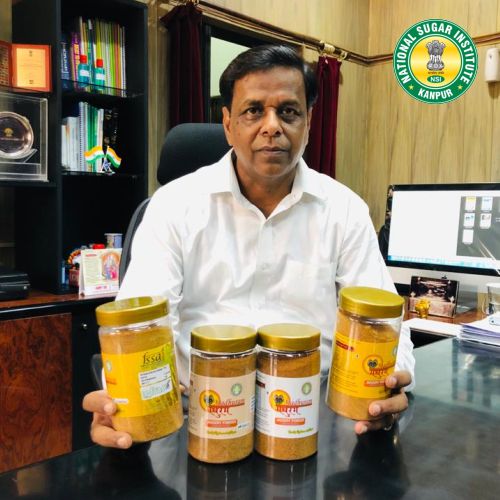 Kanpur: Jaggery is known as a traditional healthier sweetener and a good replacement of sugar and other artificial sweeteners in many applications. It is also known as ‘medicinal sugar’ rich in vitamins and minerals, finding its use in ayurvedic medicine as a blood purifier and also used for curing infections. Traditionally jaggery is used in sweets and savory food products and may also find its application in confectionery products such as hard boiled sweets, biscuits, breads, pastries etc., besides using jaggery for direct consumption. The main jaggery producing countries, principally India, Colombia, Pakistan, China, Brazil, Bangladesh, Myanmar and Philippines. Colombia has the largest yearly per capita consumption of jaggery with around 10 Kg, followed by Myanmar with around 7 Kg/year/annum. India’s yearly per capita consumption is less than 4.0 Kg/year/annum. Jaggery being highly rich in important minerals like Calcium, Magnesium, Potassium, Phosphorus, Sodium, Iron, Manganese, Zinc, Copper, and Chloride), vitamins (viz., Vitamin A, Vitamin B1, Vitamin B2, Vitamin B5, Vitamin B6, Vitamin C, Vitamin D2 & Vitamin E) is considered as a beneficial source of food in order to mitigate problems of malnutrition and immunity.

However, the conventional process of jaggery production is considered to be generally un-hygienic and outdated, lacking in product quality and its keeping quality as well. This is one of the prime reason as to why inspite of various benefits, jaggery has not found its desired place in the market shelves. In the present time when the world struggles with covid-19 pandemic, need of high value nutritious product is high on demand amongst consumers. Keeping this in view, National Sugar Institute, Kanpur has worked on improving the technology of jaggery production so as to produce “non-chemical jaggery fortified with immunity booster & produced under hygienic conditions”. The technology focusses on maintenance of hygienic conditions during processing, enhancing juice extraction efficiency through use of improvised milling techniques, use of efficient process equipment, juice clarification by vegetable mucilage’s, juice concentration in specially designed evaporators and concentrators. The jaggery in the modified process technology may be fortified with other ingredients like flax seeds, turmeric, ginger, cinnamon etc. that would enhance its nutritional profile and also will suit the consumer palette. Jaggery fortified with such natural ingredients is expected to work as an immunity booster which is very much required in the current scenario. Packing in another area where we have suggested improvements for enhancing the shelf life of the product, said Prof. Narendra Mohan, Director, National Sugar Institute, Kanpur.

On the technical advice of National Sugar Institute, Kanpur manufacturing of such high value jaggery products has been taken up and the same are now available in the market shelves as well. The institute has also received request from Punjab and Haryana State Sugar Federation for rendering advice on setting up of such plants, said Prof. Mohan.