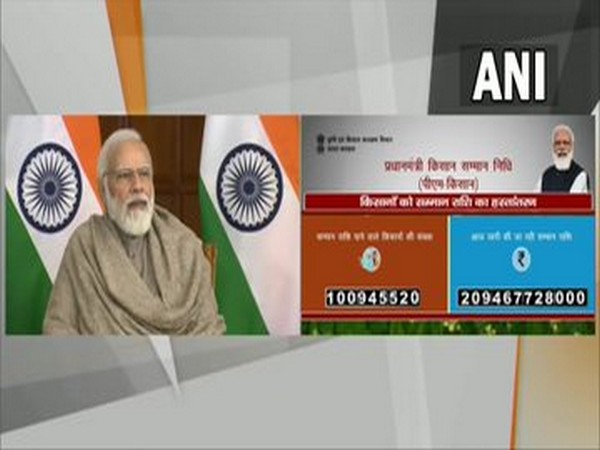 New Delhi [India], January 1 (ANI): Prime Minister Narendra Modi on Saturday said that one of the ways to save our planet from becoming barren is organic farming, urging farmers to switch to the chemical-free method of cultivation.

Speaking at the release of the 10th installment of financial benefit under PM-KISAN, the Prime Minister said, “One big way to save our earth from becoming barren is chemical-free farming. Therefore, in the last year, the country has launched yet another visionary effort- Natural Farming. I urge my farmer friends to switch to chemical-free farming. Today, as we enter 2022, this is the year to involve ourselves in new challenges.”
He further said that an initiative has also been launched for farmers where they will get money from crop residues, stubble, etc.

“Efforts have also been started for farmers to get money from crop residues, stubble, etc. Hundreds of new units are being set up across the country to make biofuel from agricultural residues,” he said.

PM Modi said over Rs 1.8 lakh crore has been transferred directly to accounts of farmers under PM-KISAN scheme. Today, this Samman Nidhi is very useful for their small expenses, he added.

“Today, the Gobardhan scheme is going on in the country, through this incentive are being given to make biogas in the villages. Plants are being set up across the country to increase the use of biogas. Millions of tonnes of quality organic manure will also be produced every year from these plants, which will be available to the farmers at a low cost,” added PM Modi.

He further said that our Farmer Product Organizations (FPO) have a big role to play in mobilizing the growing potential of small farmers of the country.

During the event, the Prime Minister also released an equity grant of more than Rs 14 crores to about 351 Farmer Producer Organizations (FPOs), which will benefit more than 1.24 lakh farmers.

As per an official statement from the Prime Minister’s Office, this is in line with the government’s continued commitment and resolve to empower grassroots-level farmers.

This will enable the transfer of an amount of more than Rs 20,000 crore to more than 10 crore beneficiary farmer families, said PMO.

Under the PM-KISAN scheme, a financial benefit of Rs 6,000 per year is provided to the eligible beneficiary farmer families, payable in three equal four-monthly installments of Rs 2,000 each. The fund is transferred directly to the bank accounts of the beneficiaries. In this scheme, Samman Rashi of over Rs 1.6 lakh crore has been transferred to farmer families so far. (ANI)