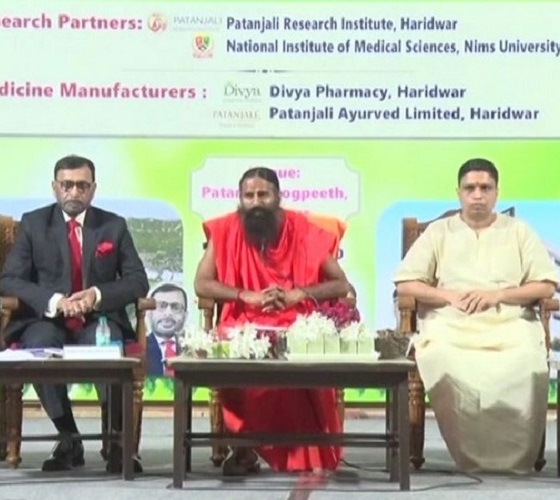 Haridwar (Uttarakhand) [India], June 23 (ANI): Patanjali on Tuesday launched ‘Coronil and Swasari’, what it claims is the Ayurvedic cure for treating COVID-19, which they said has been shown 100 per cent favourable results during clinical trials on affected patients, at Patanjali Yogpeeth here.

“The whole country and the world was waiting for medicine or vaccine for corona. We are proud to announce that the first Ayurvedic, clinically controlled trial based evidence and research-based medicine has been prepared by the combined efforts of Patanjali Research Centre and NIMS,” Yoga Guru Ramdev said at the press conference here adding that it has shown “100 per cent recovery rate within 3-7 days.”

“We are launching COVID medicines Coronil and Swasari today. We conducted two trials of these, first clinical controlled study, which took place in Delhi, Ahmedabad, among many other cities. Under this 280 patients were included and 100 per cent of those recovered. We were able to control Corona and its complications in this. After this the all-important clinical control trial was conducted,” he added.

He thanked the Director, National Institute of Medical Sciences, NIMS University, Jaipur, Dr Balbir Singh Tomar and all other doctors and scientists for their help in creating the medicine.

“With the help of NIMS, Jaipur we conducted the clinical control study on 95 patients. The biggest thing which came out of this is that within three days 69 per cent patients recovered and became negative from positive (cases) and within seven days 100 per cent of them became negative,” he added.

He also said that necessary approvals for conducting the trials of medicine on patients had been taken from competent authorities.

Acharya Balkrishna, Chief Executive Officer (CEO) of Patanjali, was also present at the occasion of the launch along with other officials and representatives who had taken part in the preparation of the medicine.

According to the latest update by the Union Ministry of Health and Family Welfare (MoHFW), 14,011 deaths have been recorded due to the infection so far in the country. (ANI)