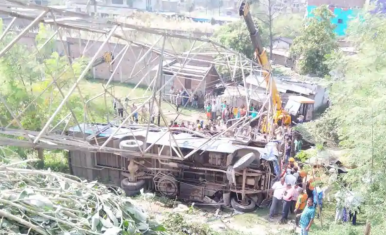 An accident claimed four lives in Patna as a private bus rammed an electricity pole, overturned and fell into a ditch. The driver lost control as he was trying to overtake a vehicle.

The bus was carrying passengers from Patna to Samastipur.

Police and local authorities rushed to the spot as they received news of the accident. The bus was lifted out of the ditch with the help of a crane.

The injured passengers were admitted to the Nalanda Medical College and Hospital.

The accident took place near Dhanuki mod and there are reports of it getting recorded on a CCTV installed nearby. It is also reported that out of the four deceased, two were pedestrians.