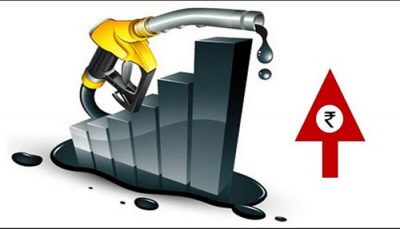 New Delhi, Sep 10 (PTI) Petrol and diesel prices continued to rise Monday, scaling new highs as the depreciating rupee made imports costlier.
Petrol price Monday increased by 23 paisa a litre and diesel by 22 paisa a litre, according to the price notification issued by state fuel retailers.
The increase pushed the petrol price in Delhi to a record high of Rs 80.73 per litre. Diesel rate touched its highest level of Rs 72.83 a litre.
Fuel prices in Delhi are the cheapest among all metros and most state capitals due to lower taxes.
The new high came on the day when opposition parties led by the Congress called for a nation-wide ‘Bharat Bandh’ to protest against the spiralling fuel prices. They blame the government’s unwillingness to cut excise duty for high fuel prices and consumer burden.
The rupee Monday dropped by around 94 paise to touch a record low of 72.67 to the dollar due to a strengthening dollar and a widened current account deficit.
Since mid-August, petrol price has risen by Rs 3.65 a litre and diesel by Rs 4.06 per litre as the rupee hit the record low against the US dollar, making imports costlier.
Almost half of the retail selling price of the two fuels is made up of central and state taxes.
According to oil companies, petrol at refinery gate costs around Rs 40.50 a litre and diesel Rs 43 per litre.
The Centre currently levies a total excise duty of Rs 19.48 per litre of petrol and Rs 15.33 per litre on diesel. On top of this, states levy Value Added Tax (VAT) — the lowest being in Andaman and Nicobar Islands where 6 per cent sales tax is charged on both the fuels.
Mumbai has the highest VAT of 39.12 per cent on petrol, while Telangana levies the highest VAT of 26 per cent on diesel. Delhi charges a VAT of 27 per cent on petrol and 17.24 per cent on diesel.
The Central government had raised excise duty on petrol by Rs 11.77 a litre and that on diesel by 13.47 a litre in nine instalments between November 2014 and January 2016 to shore up finances as global oil prices fell, but then cut the tax just once in October last year by Rs 2 a litre.
This led to its excise collections from petro goods more than doubling in the last four years — from Rs 99,184 crore in 2014-15 to Rs 2,29,019 crore in 2017-18. States saw their VAT revenue from petro goods rise from Rs 1,37,157 crore in 2014-15 to Rs 1,84,091 crore in 2017-18.