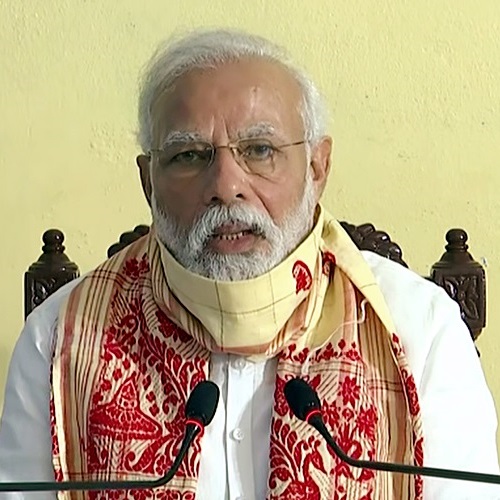 “Today is a historic day, a scheme for the welfare and for the livelihood of the poor has been started. It is dedicated to the workers, to the youths and women living in villages. The majority of these include those who have returned to their villages during the lockdown, they want to develop their village through their efforts and skill,” Modi said at the launch of the event.

Cabinet Secretary, Rajiv Gauba, Chief Secretaries of Odisha and Jharkhand, along with Chairman, Railway Board, among others, also attended the launch event.

The Prime Minister also held a conversation with officials and workers from Khagaria, Bihar, through video conferencing, during the event.

Beginning his address the Prime Minister said that every Bihari is proud of the valour shown by the personnel of 16 Bihar regiment in the violent face-off with Chinese troops which took place on June 15-16 in Ladakh.

“The country is proud of the sacrifice made by our braves in Ladakh. Today when I am speaking to people of Bihar, I will say the valour was of Bihar Regiment, every Bihari is proud of it. I pay tributes to the braves who laid down their lives for the nation,” Modi said in his address.

This Garib Kalyan Rojgar Abhiyaan with a duration of 125 days, will work in mission mode and involve focused implementation of 25 categories of works or activities in 116 districts, each with a large concentration of returnee workers in 6 states of Bihar, Uttar Pradesh, Madhya Pradesh, Rajasthan, Jharkhand and Odisha.

Public works undertaken under this campaign will have a resource envelope of Rs 50,000 crore with the objective to provide livelihood opportunity to workers who have returned to their native places and other affected people residing in villages.

It also seeks to build public infrastructure in rural areas and offer jobs based on an individual’s skill to them. (ANI)