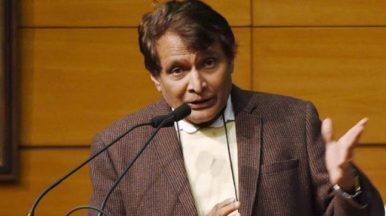 New Delhi, Aug 27 (PTI) Commerce Minister Suresh Prabhu has asked Indian businesses to carry out a market study to identify priority areas for expanding cooperation with Kenya, as the country eyes fresh avenues to boost bilateral trade with the African nation.
The Eighth Session of the India-Kenya Joint Trade Committee meeting was held in Nairobi, the capital city of Kenya from August 22-25.
“Addressed the India-Kenya Joint Business Council today in the presence of industry leaders & business representatives from both countries. Invited Kenyan businesses to invest in India and urged Indian businesses to research key priorities & design products specific to Kenyan needs,” Prabhu tweeted after the meeting.
During the visit, he also met Kenya’s Foreign Affairs Chief Administrative Secretary Ababu Namwamba and discussed with him on exploring new avenues of cooperation, mutual growth and strengthening of diplomatic ties between the two countries.
“We are keen to explore new opportunities in logistics, agriculture, energy, pharma and many other sectors with Kenya,” the minister had tweeted after landing in Kenya.
The joint trade meeting took place against the backdrop of India’s exports to Kenya dropping to USD 1.97 billion in 2017-18 from from USD 4.11 billion in 2014-15.
India’s imports from Kenya too slowed down from USD 117.42 million to USD 72.57 million during the same period.
In his address to the Kenyan and Indian business leaders, Prabhu emphasised on research and design in products specific to Kenyan needs.
India also explored opportunities to increase exports of petroleum products, cars and motorcycles, and mobile phones to Kenya during the meeting, sources said.
The meeting covered India’s contribution in implementation of Kenya’s Big Four Agenda – food security, affordable housing, universal healthcare and manufacturing, expansion and diversification of bilateral trade – an official statement said.
The two sides also deliberated upon issues like Kenya’s readiness to join the International Solar Alliance, implementation of Lines of Credit of over USD 220 million, extended by India in power transmission, SMEs development, revival of the Rivatex factory and agricultural mechanisation.
A meeting of India-Kenya Joint Business Council was held on the sidelines of the joint trade committee meeting.
India is one of Kenya’s largest trade partners and the second largest foreign investor in Kenya. Indians are the third-largest group of tourists to Kenya.
The last meeting of Joint Trade Committee was held in New Delhi in February 2015.