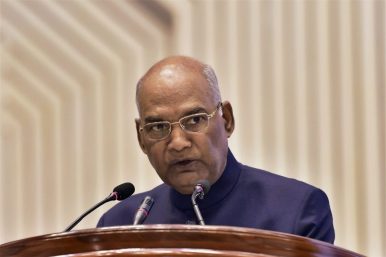 Melbourne, Nov 24 (PTI) President Ram Nath Kovind’s just-concluded visit to Australia, the first by an Indian head of state, has added momentum to the bilateral ties and enhanced the strategic cooperation, officials said on Saturday.
Kovind arrived in Sydney on Wednesday on the second leg of his two-nation trip after concluding his trip to Vietnam.
During his four-day visit, the President engaged with the leadership of Australia at federal and provincial levels, the business community, students and academics, and Indian diaspora, the Ministry of External Affairs (MEA) said in a statement.
“The first Presidential visit from India to Australia has added momentum to the ongoing growth in our bilateral engagements which in recent years has not only increased in regularity but has also intensified in all areas of our strategic cooperation,” it said.
The Australian leadership expressed exceptional warmth and highly appreciated the growing ties and engagement with India, the MEA said.
India-Australia bilateral relations have been on an upswing and the economic ties grew during the past decades, after liberalization of the Indian economy in the early 1990s.
According to the Indian High Commission in Canberra, bilateral trade in goods and services has grown from Australian dollar 6.54 billion in 2003-04 to Australian dollar 19.29 billion in 2015-16.
Kovind became the first-ever President of India to pay a state visit to Australia.
The President held talks with Prime minister Scott Morrison on Thursday to step-up bilateral strategic ties as the two countries signed five agreements to boost investments and enhance cooperation.
The agreements were exchanged in key areas like agricultural research, education, disability, trade and investments, scientific collaboration and innovation.
Prime Minister Morrison also released Australia’s response to the India Economic Strategy, a blueprint to transform the economic engagement to increase the Australian investment from current 10 billion dollars to 100 billion dollars by 2035.
Australia also pinpointed the initial implementation plan with key actions for next one year which will include agreements forged between Austrade and Invest India, the establishment of an Australia-India Food Partnership, opening up new opportunities for agri-tech and service companies and Australia-India Strategic Research Fund grants of up to Australian dollar 500,000.
The fund is designed to help researchers solve the challenges shared by both nations, including energy storage, marine science, and plant genomics.
Kovind, who was accorded a ceremonial Guard of Honour by Governor General Peter Cosgrove in Sydney, also visited Melbourne on Friday addressed university students.
Welcoming the creation of the Australian Space Agency, President suggested that the two countries can cooperate in space technology especially considering India’s long-standing experience in the space sector, the MEA said.
Kovind on Thursday unveiled a bronze statue of Mahatma Gandhi in Sydney.