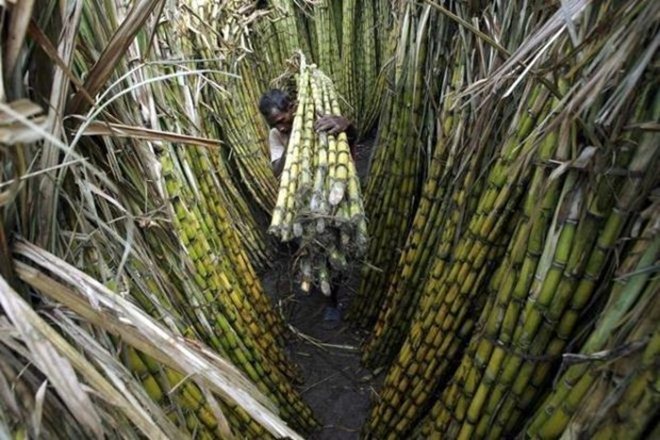 Cane arrears have dropped at a slow pace after the government reintroduced sugar sales quota in June, belying the very objective of the food department’s move to bring back the controls. Cane arrears have dropped at a slow pace after the government reintroduced sugar sales quota in June, belying the very objective of the food department’s move to bring back the controls.
Data show cane arrears stood at Rs 18,512 crore as of June 30, down only Rs 1,339 crore from Rs 19,851 crore as of June 15. Between June 1 and 15, the drop was just Rs 1,310 crore. However, in the fortnight before the quota system was reintroduced, cane arrears had dropped by Rs 1,408 crore (between May 15 and end-May) even though sugar prices were lower than in June.
In fact, the quota system has only constricted mills’ ability to cut inventory and clear dues, just when sugar rates began to improve due to the imposition of a minimum sale price. The allocation of a smaller sales quota to mills in Uttar Pradesh — the largest sugar producer that also made up for over 66% of total arrears at the end of June — than those in Maharashtra that accounted for just around 6% of dues, has further exposed flaws in the food department’s policy-making.
The fact that cane arrears stood at a record Rs 18,512 crore at the end of June, sharply higher than Rs 4,881 crore in the same period in 2017 and Rs 4,934 crore in the previous year, suggests the magnitude of the crisis at hand that could be a politically-senstitive issue in at least Uttar Pradesh ahead of the 2019 Lok Sabha polls. Of course, arrears in the past two years were cleared fast as there was no limit on sales and the sugar prices were higher, too.
Thanks to the exorbitantly high cane prices fixed by both the Centre and states like UP year after year, exports have been unviable, too. With industry executives expecting a record production in 2018-19, the massive surplus inventory with mills is just going to swell further.
Confusion prevailed over the actual cane dues in July. While an official statement after the Cabinet cleared the fair and remunerative price of cane on July 17 pegged the dues at Rs 17,824 crore then (which means a paltry fall from the June level), the food ministry now estimates these at Rs 16,868 crore as of July 15.
A detailed questionaire to food secretary Ravi Kant on cane arrears and the rationale behind fixing lower quota for Uttar Pradesh that accounts for an overwhelmingly large cane arrears, sent on August 1, remained unanswered until the paper went to press on August 12, despite a reminder.
What makes the meagre drop in June arrears even worse is the fact that cane purchases for the current marketing year through September were all but over in June, unlike in earlier months when the raw material was still being bought by mills, adding to the dues each day. (Cane supplies usually start slowing since May). Clearly, despite a rise in wholesale sugar prices in June from the previous month, the arrears didn’t ease sharply. In Mumbai, for instance, wholesale sugar prices rose an average of 13% in June from the May level, according to data by the consumer affairs ministry.
If jacking up the sugar price was the intended goal of the food department in fixing the quotas, the objective would have been better served by simply fixing the minimum sale price at Rs 34-35 instead of Rs 29, without having to limit the sales or announcing other so-called incentives to improve mills’ margin, according to some millers.
Even the quota allocation was flawed from the start. While the food ministry has increased the share of Uttar Pradesh in the total quota for August, it’s still lower than Maharashtra. The allocation for UP in the previous two months was sharply lower than Maharashtra that accounted for just around 6% of the arrears at the end of June. The food department hasn’t explained the reason behind such allocation despite queries; the entire system of quota fixing remains opaque as in the past, before the government lifted such controls in 2013, accepting the Rangarajan panel recommendations.
Interestingly, some mills say lower quota to UP mills only helped traders who were sitting on huge stocks and waiting for such an opportunity to exploit at the cost of mills, which, unlike traders, have to clear dues owed to farmers.