Home All News Red Alert In Kerala As Storm Looms 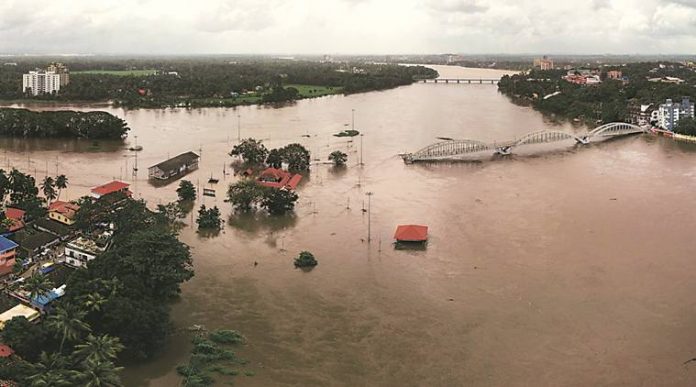 Union Home Minister Rajnath Singh on Sunday conducted an aerial survey of flood-ravaged Kerala and announced an immediate relief of ₹100 crore as the State braced for another spell of heavy rain after a fresh low pressure area developed in the Bay of Bengal.
State authorities said the death toll in the recent monsoon rain rose to 38 and more than 1,00,000 people had been shifted to 1,026 relief camps.
The Union Minister’s announcement of aid came as the first response to the State’s plea for ₹1,220 crore from the National Disaster Response Fund. The Centre had earlier sanctioned ₹80 crore and another ₹18.24 crore assistance to the State.
‘Unprecedented’
Mr. Singh called the flood situation serious and unprecedented in the history of the State. He was accompanied by Chief Minister Pinarayi Vijayan, Union Minister of State for Tourism K.J. Alphons and senior government officials.Later, Mr. Singh told the media that the Centre was convinced about the losses Kerala had suffered. According to him, it was the worst floods the State had experience since 1924. The tourism and agriculture sectors had suffered badly. Large tracts of paddy and cash crops and banana plantations were damaged. The infrastructure sector, including roads and buildings, were damaged and power lines snapped, he said.
The rain-related calamities had rendered hundreds homeless and around 100,000 people had to be sheltered in relief camps, he said.
Offering all support, Mr. Singh said the government would consider the demands for additional relief assistance after a detailed evaluation by an inter-ministerial team. A high-level team, headed by him, would evaluate the report of the inter-ministerial team. More men from the National Disaster Response Force would be deployed in Kerala, if required, he added.
The Minister, who visited a relief camp in Paravur taluk, said the people in the camps were satisfied with the arrangements made for them and none complained about any inadequacies.

Fourth shutter of Idamalayar dam opens
Emergency services in the State remained on the alert for heavy rains and flash floods, as weathermen maintained a sharp lookout for the development of a fresh low pressure area in the Bay of Bengal. The State Disaster Management Authority has declared a red alert in Idukki and Wayanad districts up to August 14 in the light of the extremely heavy rain warning issued by the weather office. Alappuzha, Kannur, Ernakulam, Palakkad, Malappuram and Kozhikode have been put on red alert till Monday.

One death was reported on Sunday in Palakkad, and five people are missing. More than 100,000 people displaced by floods over the last four days have been shifted to 1026 relief camps. As many as 243 houses have been destroyed and 4392 damaged in the heavy rains lashing the eastern parts of the state. Crops in 1513 hectares of land have been damaged, causing an estimated loss of 10.66 cr.
The fourth shutter of the Idamalayar dam was opened on Sunday to stabilise the water level in the reservoir following intermittent heavy rains in the catchment areas. Wayanad continued to reel under floods as the Kabani river overflowed its banks, submerging vast tracts of land. The Kuttanad region also experienced heavy water-logging due to the combined effect of tidal flooding and the discharge from the Kakki dam.
According to the mid- day weather inference issued by the India Met Department on Sunday, a fresh low pressure area is very likely to form over northwest Bay of Bengal and neighbourhood during next 24 hours under the influence of a lingering cyclonic circulation over north coastal Odisha. The weather office has warned of heavy to very heavy rainfall at one or two places in Kerala on Monday, followed by heavy rain on Tuesday.
Fishermen are advised not to venture into the Southwest and Central Arabian Sea as conditions are likely to be very rough.