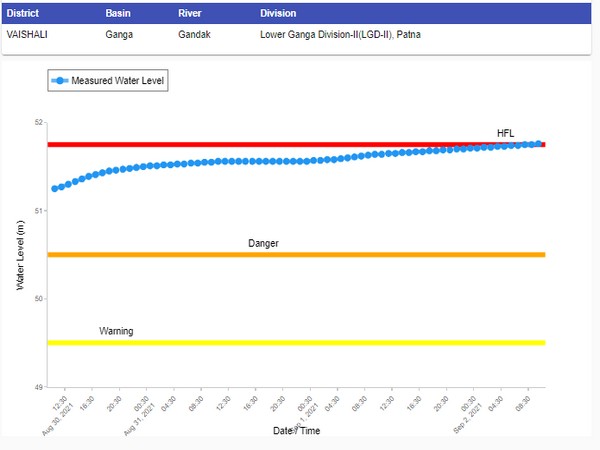 Earlier today, the Commission informed, “River #Gandak at #Rewaghat in district #MUZAFFARPUR #Bihar is continues to flow in SEVERE SITUATION with Rising trend as on 2.9.2021. @MoJSDoWRRDGR @NDRFHQ.”

Earlier, Bihar Chief Minister Nitish Kumar on Tuesday had said that the state government is continuously monitoring the flood situation in Darbhanga district. He had also conducted an ariel survey of the flood-affected areas of Darbhanga.

The Chief Minister had also informed that financial aid of Rs 6,000 is being provided to affected families. “The state government is continuously monitoring the situation of affected areas. Every time Bihar gets flooded during the monsoon season. The government is planning something to control the water level of rivers in Bihar. We are hoping that the plan will not make the situation worse in the future as it is now,” Kumar had told reporters.

More details are awaited. (ANI)
To receive ChiniMandi updates on WhatsApp, please click on the link below.
WhatsApp Group Link