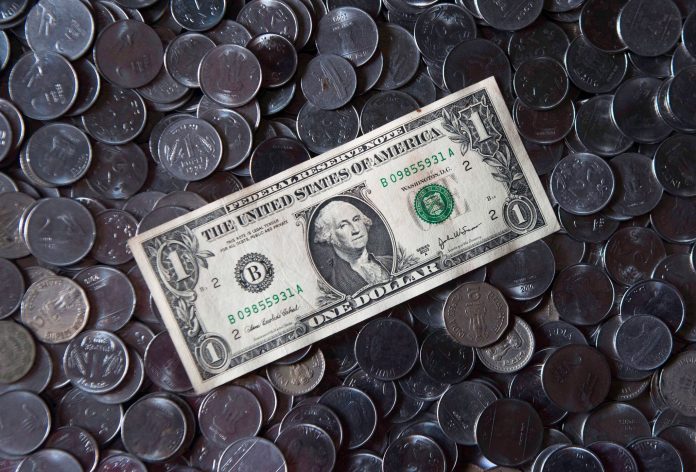 ChiniMandi (Aug 13): The rupee today crashed by a mammoth 110 paise – its biggest single-day fall in five years – to end at a lifetime low of 69.93 as the US dollar gained rapid strength amid fears that economic crisis in Turkey could spread to other global economies.
Panic and capitulation overshadowed trading mood as traders and speculators saw no signs that monetary authorities would step into the foreign exchange market to support the domestic unit.
This is the biggest single day fall for the rupee in the past five years. Previously, the rupee had dropped 2.4 per cent or 148 paise in a single day in August 2013.
The rupee also ended lower against British pound, euro and Japanse yen.
The rupee was mainly impacted by fall in Turkish Lira,” said a treasurer of a state-owned bank.
The Turkish lira dived almost 8 per cent today to a low of 7.24 against the US dollar, fuelling fears that it may impact financial institutions in Europe. Later, it recovered some ground after the finance ministry assured steps to rein in the crisis.
Global currencies except for safe-haven Japanese yen and Swiss franc faced a rout against the dollar. The pound sterling was trading near 2018 lows, the euro declined to a 13-month low, the Russian ruble lost 2 per cent, while South African rand plunged 7 per cent in a global meltdown.
The dollar index was trading higher at 96.18.
Lack of FII inflows and growing oil prices are also affecting the rupee, a PSU bank official said. Foreign investors sold shares worth Rs 971.8 crore on a net basis, provisional exchange data showed.
“RBI will not be comfortable at these levels. It was seen defending rupee at all levels,” said a senior treasury official of a public sector bank, while predicting that the rupee may fall to 70 levels against the dollar soon.
The rupee had opened strong by 41 paise at 68.42 against the US dollar in early trade today, helped by revived sentiments following optimistic macroeconomic outlook.
However, it soon reversed the gains and plunged to an early low of 69.62 in line with weakening domestic equities.
It remained under intense pressure later in the day and eventually took a deep slide to end at a lifetime low of 69.93, revealing a steep loss of 110 paise, or 1.60 per cent.
The Financial Benchmarks India (FBIL), meanwhile, fixed the reference rate for the dollar at 69.4685 and for the euro at 79.1876.
The 10-year benchmark bond yield settled unchanged at 7.75 per cent.
On the energy front, crude prices slipped as trade tensions and troubled emerging markets dented the outlook for fuel demand, though U.S. sanctions against Iran pointed towards tighter supply ahead.
The benchmark Brent for September settlement is trading weak at USD 72.68 a barrel in the early Asian session.
India’s foreign exchange reserves fell to over seven-month low of USD 402.7 billion in the week ended August 3. Total forex reserves dipped USD 1.49 billion from USD 404.19 billion in the week ended July 27, 2018, RBI data showed.
In the cross-currency trade, the rupee retreated sharply against the pound sterling to end at 89.13 per pound from 87.86 and fell back against the euro to finish at 79.52 as compared to 78.83 earlier.
It remained weak against the Japanese yen to end at 63.37 per 100 yens from 62.03.
The Japanese Yen is benefitting from the safe haven status at times of risk-off sentiment with Turkeys currency crisis continuing since the last week.
In the forward market today, the premium for dollar edged down owing to consistent receiving from exporters.