Home All News Rupee Crumbles To All-time Closing Low Of 68.95 A Dollar 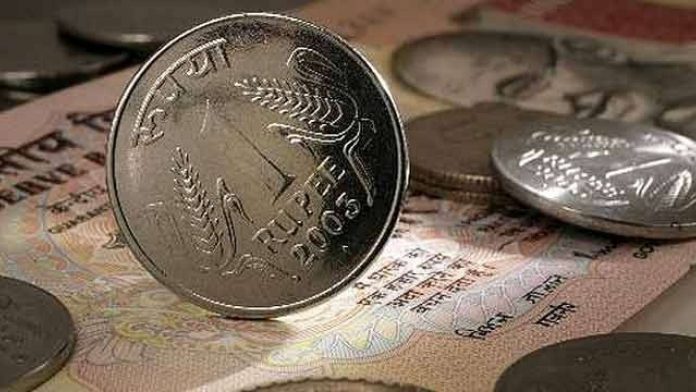 The Indian rupee tumbled for the second straight session to hit a fresh closing low of 68.95, sliding by 21 paise following a panic demand for the US dollar coupled with savage capital flight worries.

Fears over a slowdown in the country’s economy in the midst of surging international crude oil prices along with unambiguously hawkish Federal Reserve policies and widening current account deficits predominantly kept the forex sentiment highly nervous.

Suspected RBI intervention, however, hauled the rupee off an intra-day low struck in the mid-afternoon trade and prevented it from touching the psychological 69 level.

After an extraordinarily smooth ride in 2017, the home currency has been on a steady decline since April and crashed to a life-time low of 69.10 on June 28 this year. On July 2, the rupee had hit its life-time closing low of 68.80 a dollar.

A sudden outrush of foreign investors triggered by the US Federal Reserve signalling of a tighter monetary policy further complicated the challenges of managing currency markets.

Escalating trade tensions, triggered by tariffs and counter-tariffs too weighed on the trading front.
Moreover, traders are also awaiting Fed meeting minutes to be released later in the day.
The government’s announcement to hike minimum support price (MSP) of kharif crops is expected to contribute to inflationary pressures in the economy and that may prompt the central bank to raise interest rates more steeply than expected, a forex dealer said.

The rupee stands out as one of the most vulnerable and worst performing currencies in Asia with an almost 8 per cent fall in the value against the resurgent dollar bull.
The greenback has rallied since new Federal Reserve Chairman Jerome Powell delivered upbeat testimony to lawmakers last week. His acknowledgment of stronger US economic growth fuelled speculation the central bank may raise interest rates as many as four times this year.

At the Interbank Foreign Exchange (forex) market, the domestic unit opened sharply lower at 68.80 from Wednesday’s close of 68.74 on steady dollar unwinding by exporters and banks.
Succumbing to intense selling pressure, it later fell sharply to hit a session’s low of 69.01 in mid-afternoon deals before concluding the day at 68.95, revealing a loss of 21 paise or 0.31 paise. The domestic unit has lost 38 paise in last two days.
The RBI, meanwhile, fixed the reference rate for the dollar at 68.7545 and for the euro at 80.4771.
The domestic bond market also saw heavy amount of selling after two-day rally and the 10-year benchmark bond yield rose to 7.90 per cent from 7.85 per cent.

On the energy front, oil traded near its highest in 3-1/2 years, boosted by potential disruptions to flows from Iran and the Middle East despite a fresh demand from US President Donald Trump that OPEC cut prices.

Brent crude futures, an international benchmark, is trading down at USD 77.93 a barrel, in early Asian trade.
Globally, the dollar edged lower against a basket of the other major currencies, a day before the US and China were to hit each other with import tariffs, escalating a trade spat that many investors fear will hurt global growth.

The dollar index, which measures the greenback’s value against basket of six major currencies, was down at 93.97.
In the cross currency trade, the rupee lost further ground against the pound sterling to end at 91.39 per pound from 90.75 and dropped against the euro to settle at 80.64 as compared to 80.00.

It also drifted against the Japanese yen to finish at 62.33 per 100 yens from 62.21 yesterday.
Elsewhere, the common currency euro is consolidating initial gains again against the US currency on expectations of earlier rate hike amid upbeat Eurozone retail PMI data.

The British sterling also maintained its bullish tone against the greenback after BOE Governor Carney said that the UK economy is evolving as expected and that tighter monetary policy is needed.