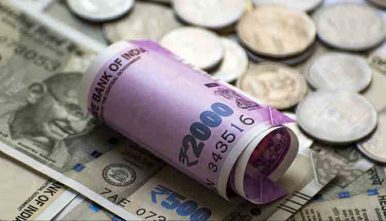 Mumbai, Sep 5 (PTI) The Indian rupee’s unabated fall continued for the sixth straight session Wednesday, hitting yet another closing low of 71.75, down 17 paise against the US currency as surging oil prices and weak trend in emerging market currencies weighed on sentiments.

Intra-day, the domestic unit plummeted to a historic low of 71.97 a dollar before finding some respite, staging some recovery towards the tail-end.

The battered rupee has lost 165 paise in the last six trading sessions.

However, the Reserve Bank swung into action to put a floor under the sliding currency and stave off a full-blown meltdown.

Heavy sell-off in local equities also weighed on the forex front. The home currency Wednesday opened higher by 18 paise at 71.40 a dollar.

The bond yield curve, however, softened to 8.05 per cent.

Besides twin deficits phenomenon, the domestic economy faces a set of risks at this juncture, a forex dealer warned.

India is vulnerable to large scale capital flight if the uncertainty persist and may see investors make their way back into developed markets due to rising interest rates in the US and other major economies.

Any further sharp erosion in the rupee would lead to a wave of corporate bankruptcies and rating impact on these companies as they have kept most of their foreign currency exposures unhedged largely bettting on rupee stability, he added.

Meanwhile, crude prices extended their losses, sliding towards USD 77 a barrel, as a tropical storm hitting the US Gulf coast weakened, offsetting support from forecasts of lower US inventories and sanctions against Iran.

At the inter-bank foreign exchange (forex) market, the rupee resumed higher at 71.40 against overnight close of 71.58 on fresh bouts of dollar selling by state-run banks.

It strengthened to 71.37 a dollar in late morning deals before collapsing to historic lows on panic dollar buying.

The Financial Benchmarks India private limited (FBIL), meanwhile, fixed the reference rate for the dollar at 71.7533 and for the euro at 83.1310.

Globally, the US dollar rose broadly as concerns grew that US President Donald Trump may soon ramp up a trade war with Beijing by imposing tariffs on more Chinese imports.

Against a basket of other currencies, the dollar index is up at 95.38.

In the cross currency trade, the rupee remained under pressure against the pound sterling to end at 91.95 per pound from 91.77 and also dropped against the euro to close at 83.12 as compared to 82.72 yesterday.

In forward market today, premium for dollar edged higher due to mild paying pressure from corporates.