Home All News Rupee Makes Strong Comeback, Rises 20 Paise To 69.91 Vs US Dollar 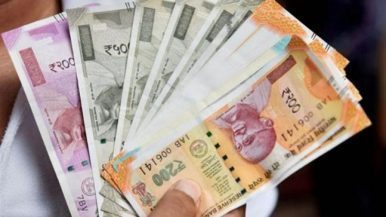 Mumbai, Aug 24 (PTI) The rupee today staged a good recovery to end higher by 20 paise at 69.91 against the US currency on bouts of dollar selling by exporters and corporates.

Excess volatility and movements in the US dollar had a major impact on the domestic currency.

The domestic unit hit a low of 70.24 before rebounding in late afternoon deals.

India’s trade deficit soared to a near five-year high of USD 18 billion, raising concerns on the current account front.

Also, global crude prices surged after a brief consolidation largely supported by signs that US sanctions on Iran, the third-biggest producer in the OPEC, are already reducing global crude supply.

The benchmark brent was up 60 cents a barrel at USD 75.33 in early Asian trade.

The market participants are now focusing on the upcoming Jackson Hole Central Banking Symposium and also closely watching developments of the US-China trade war and its implications on global growth and influences on Fed monetary policy, a forex dealer commented.

The sharp fall in rupee yesterday was clearly unexpected, he added.

Meanwhile, the US dollar continued to enjoy the Fed’s optimism from the FOMC meeting minutes expectaion of monetary tightening even investors awaited further moves in global trade disputes despite growing US political uncertainty.

The Indian economy is expected to grow by around 7.5 per cent in 2018 and 2019 as it is largely resilient to external pressures like those from higher oil prices, Moody’s Investors Service said.

In its Global Macro Outlook for 2018-19, Moody’s said the run-up in energy prices over the last few months will raise headline inflation temporarily but the growth story remains intact as it is supported by strong urban and rural demand and improved industrial activity.

In the meantime, Indian shares edged down, taking a pause after hitting record highs.

Extending its overnight bearish trend, the rupee opened lower at 70.20 at the inter-bank foreign exchange (forex) market on sustained demand for the American currency from importers and banks.

It drifted to a low of 70.24 and staggered without direction in line with most Asian peers.

But the downside pressure shifted quickly to the upside in mid-afternoon trade and moved into a bullish phase.

The local unit had lost 30 paise against the dollar.

For the week, the rupee recuperated by a whopping 24 paise after a two straight weeks of fall.

The Financial Benchmarks India private limited (FBIL), meanwhile, fixed the reference rate for the dollar at 70.1377 and for the euro at 81.1699.

The 10-year benchmark bond yield also softened to 7.87 per cent.

Against a basket of other currencies, the dollar index is down at 95.26.

In the cross currency trade, the rupee bounced back against the British pound to end at 89.86 per pound from 90.41 and also recovered against the euro to close at 80.98 compared to 81.21 yesterday. It strengthened against the Japanese yen to finish at 62.78 per 100 yens from 63.29 earlier.

Elsewhere, the euro and pound sterling traded modestly higher against the US dollar ahead of US data releases and the speech by Chief J Powell at the Jackson Hole Symposium.

The benchmark six-month forward premium payable in December moved down to 104-106 paise from 105-107 paise, while the far-forward June 2019 contract was quoted unchanged at 253-255 paise.