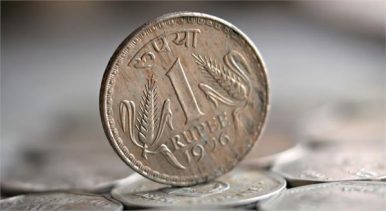 Mumbai, Sep 12 (PTI) The rupee Wednesday rebounded from the historic low of 72.91 to end higher by 51 paise at 72.18 against the dollar after the finance ministry assured of steps to avert its fall to “unreasonable levels”.

The rupee had crashed to an all-time low of 72.91 in morning trade tracking higher crude oil prices that increased concerns of widening trade deficit at home.

The forex sentiment bolstered after the government said all steps will be taken to ensure the domestic currency does not depreciate to “unreasonable levels”, amid reports that Prime Minister Narendra Modi will take stock of the economic situation over the weekend.

“Government and RBI will do everything to ensure that rupee does not slide to unreasonable levels. Today’s correction seems to reflect that realisation,” Economic Affairs Secretary Subhash Chandra Garg tweeted. Adding to the bullish mode, the country’s trade deficit for August softened to USD 17.4 billion against near five-year high of USD 18.02 billion. The rupee hit a day’s high of 71.86, showing a sharp jump of 105 paise from the historic low, in the afternoon trade on positive sentiment. The currency pared some gains in the last hour of trade to settle at 72.18 to the US dollar, revealing a smart rise of 51

paise or 0.70 per cent — the biggest one-day gain for the domestic unit since May 25.

The RBI intervened heavily in the foreign exchange market after the rupee took another plunge to threatened to breach the 73-mark, currency dealers said. Traders and investors were also awaiting inflation and IIP data due today and could be a big trigger for the battered currency, a forex dealer said. India’s benchmark 10-year sovereign yield also eased to 8.13 per cent.

The Indian currency has been caught in a free fall for last few sessions and tagged among the worst performing currencies in Asia having weakened by a steep 13.81 per cent since the beginning of the year.

Asia’s third-largest economy is battling with deluge of headlines covering from a range of fundamental concerns to deteriorating macro environment against the grim backdrop of surging global crude prices and sustained capital outflows. Besides, multiple factors including – inflation fears and a widening current account deficit along with escalation in global trade war tensions have also gripped forex sentiment. This year has also seen a sustained outflow of foreign funds from equity and debt markets.

Meanwhile, crude prices turned little weak, having neared the USD 78-mark after a drop in US crude inventories and the prospect of supply disruption from Iran.

The Financial Benchmarks India private limited (FBIL), meanwhile, fixed the reference rate for the dollar at 72.7549 and for the euro at 84.3244. The forex and money market will remain closed tomorrow on account of ‘Ganesh Chaturthi’. In the cross currency trade, the rupee also bounced back against the British Pound to close at 93.76 per pound from 94.63. It recovered against Japanese yen to finish at 64.74 per 100 yens from 65.29 earlier.

On the global front, the US dollar traded little changed against its major rivals as investors were closely watching trade developments after US President Donald Trump threatened to impose tariffs on almost all Chinese imports.

Against a basket of other currencies, the dollar index was higher at 95.07.

In forward market, premium for dollar declined owing to mild receiving from exporters.