Home All News Rupee Recovers 9 Paise To End At 72.60; Focus On Fed Meet 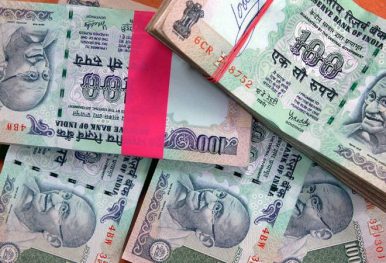 Mumbai, Sep 26 (PTI) The rupee bounced back after a two-day downtrend and ended higher by 9 paise at 72.60 against the American unit on bouts of dollar selling by exporters with the FOMC rate decision firmly in the spotlight.

Although, the home currency managed to pull back towards the tail-end trade after initial wobbliness despite international crude prices ruling at their highest in nearly four years.

The rupee had depreciated by 49 paise in last two days.

Indias fiscal deficit for the April-August period stood at 94.7 per cent of the estimate for this financial year, data released yesterday showed.

The benchmark 10-year sovereign yield also dropped by 5 bps to end at 8.07 per cent on easing liquidity concerns.

US-China trade war fears seem to be easing after China’s response to the latest US tariff which was less aggressive than it might have been, adding some support to the recovery trend.

The Federal Reserve is widely expected to lift federal funds rate by 25bps to 2.00-2.25 per cent today.

Meanwhile, benchmark Brent crude was trading around its highest in nearly four years at 81.87 a barrel, while US crude futures fell as Washington tried to assure consumers that the market would be well supplied before sanctions are re-imposed on producer Iran.

India’s economy continues on a robust growth path, the Asian Development Bank (ADB) said, while maintaining the growth forecast for the current fiscal at 7.3 per cent.

Domestic bourses, however, exhibited extreme volatility in response to investors risk appetite swings ahead of the derivatives expiry tomorrow and ended lower after a brief overnight relief rally.

Most Asian markets ended higher, led by Chinese stocks on news that MSCI is considering to increase its A shares in the MSCI indexes after the initial 5 per cent inclusion.

At the inter-bank foreign exchange (forex) market, the rupee started with a mild negative bias at 72.70 against the American unit on stray month-end dollar demand from importers.

It weakened further to hit a session low of 72.75 in mid-morning deals.

The Indian unit came off lows to trade in positive terrain in late afternoon session and touched a near one-week high of 72.53 before ending the day at 72.60, showing a gain of 9 paise, or 0.12 per cent.

The Financial Benchmarks India private limited (FBIL), meanwhile, fixed the reference rate for the dollar at 72.7182 and for the euro at 85.5365.

In the cross-currency trade, the rupee recouped losses against the British Pound to close at 95.45 per pound from 95.65 and also recovered against the euro to finish at 85.25 from 85.33 earlier.

The local currency strengthened against the Japanese yen to settle at 64.29 per 100 yens from 64.46.

On the global front, the dollar gained ground against a currency basket on Wednesday ahead of a widely anticipated rate hike by the Federal Reserve at the conclusion of its two-day policy meet.

Against a basket of other currencies, the dollar index is up at 93.93.

In forward market, premium for dollar declined due to sustained receiving from exporters.