Home All News Rupee Recovers From Record Low, Up 23 Paise Against US Dollar 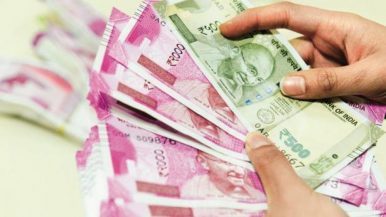 Mumbai, Sep 3 (PTI) The rupee recovered from all-time low of 71 and strengthened by 23 paise to 70.77 against the US dollar in early trade at the interbank foreign exchange market Monday amid robust growth data for the April-June quarter of current fiscal.

Official data released after market hours on Friday showed India’s economy grew at a two-year high of 8.2 per cent in the April-June quarter of 2018-19 on strong performance of manufacturing and agriculture sectors, increasing its lead over China to remain the world’s fastest growing major economy.

Forex dealers said besides fresh selling of the American currency by exporters as well as banks, a higher opening in the domestic equity market supported the rupee.

However, the a positive dollar against other currencies overseas, on escalating global trade tensions, capped the gains.

On Friday, the rupee had plunged by 26 pise, or 0.37 per cent, to a record low of 71 against the US currency due to worsening macroeconomic factors and heavy month-end dollar demand from importers.