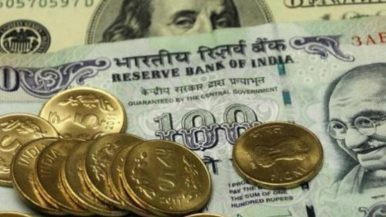 Mumbai, Aug 23 (PTI) The rupee today sank 30 paise to close below the 70-mark against the US currency due to renewed worries about a hike in US interest rates amid global trade war jitters.
The domestic currency ended at 70.11 per dollar, a loss of 30 paise or 0.43 per cent over the previous close. In day trade, the rupee had crumbled to a session low of 70.17 per dollar.
The rupee suffered its the biggest single-day drop in past one week, snapping a two-straight session recovery trend.
Forex sentiment wobbled with a resurgent dollar as currency traders increased their expectations for a fourth interest rate hike this year after the Federal Reserve released its meeting minutes overnight.
The US Federal Reserve in meeting minutes indicated that it may hike rates again if the economy stays on track even as it flagged “ongoing trade disagreements and proposed trade measures as an important source of uncertainty and risks”.
The US dollar launched a spirited recovery from its previous five days of losses and gained against its major trading peers. The US dollar index was up 0.37 per cent at 95.35 against a basket of six currencies.
Speculative traders and investors also raised short positions on the Indian rupee.
A fresh wave of global risk-aversion trade, triggered by the implementation of new tariffs by the world’s two largest economies revived fears of a full-blown trade war, further added to the downbeat mood.
The US and China escalated their ongoing trade war by implementing 25 per cent tariffs on USD 16 billion worth of imports on both sides.
A sharp spike in international crude oil prices due to a combination of factors also weighed on the trading front.
The benchmark Brent was trading at USD74.55 a barrel today. The domestic currency resumed with a sharp fall at 70.02 against Tuesday’s close of 69.81 at the inter-bank foreign exchange (forex) market.
Sliding down a steep wave, the rupee crumbled to hit a session low of 70.17 in mid-afternoon deals before ending at 70.11, revealing a sharp loss of 30 paise, or 0.43 per cent.
It had appreciated by 34 paise after crashing to fresh lifelows last week.
The Financial Benchmarks India private limited (FBIL), meanwhile, fixed the reference rate for the dollar at 70.0656 and for the euro at 81.0486.
The 10-year benchmark bond yield also rallied by 5 bps to 7.88 per cent.
In the cross currency trade, the rupee remained under pressure against the euro to finish at 81.21 compared to 80.44 and also drifted against British pound to settle at 90.41 per pound from 89.61 earlier.
The local unit, however recovered against the Japanese yen to close at 63.29 per 100 yens from 63.33 per 100 yens.
In forward market today, premium for dollar showed a mixed trend owing to lack of market moving factors.
The benchmark six-month forward premium payable in December edged lower to 105-107 paise from 106-108 paise, while the far-forward June 2019 contract held steady at 253-255 paise.