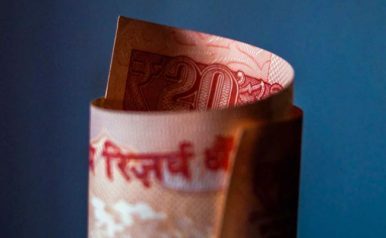 Mumbai, Aug 31 (PTI) The rupee today slumped by 26 paise breach the historic low of 71 level for the first time against the US currency due to firming crude oil prices and strong month-end demand from oil importers.
At the Interbank Foreign Exchange (Forex) market, the local currency opened lower at 70.95 a dollar and slipped further to hit its lifetime low of 71 from its previous close of 70.74.
The rupee pared some of the losses to touch a day’s high of 70.85 but slumped in late trade to close at its lifetime trading low of 71.00, showing a loss of 26 paise or 0.37 per cent over the previous close.
Forex dealers said besides robust month-end demand for the American currency from oil importers, dollar’s strength against its rival currencies on expectations of rising interest rates amid lingering Sino-US trade tensions, weighed on the domestic currency.
“The rupee has made a new record low of 71 today on the back of rising crude oil prices in the international market. Emerging market currencies are under pressure, this has also weighed on the rupee. The dollar index continues to remain higher on expectations of aggressive interest rate hike by the Federal Reserve,” Rushabh Maru – Research Analyst, Anand Rathi Shares and Stock Brokers said.
Yesterday, the rupee slid further by 15 paise to close at a fresh lifetime low of 70.74 to the dollar due to strong demand for the greenback from oil importers and surging crude oil prices stoking inflation fears.
Growing fears about rising inflation in amid high global crude oil prices and consistent outflow of foreign funds from the domestic equity market also weighed on the domestic currency.
Benchmark Brent crude oil was at USD 78 a barrel in early Asian trade.
Meanwhile, both the key indices Sensex and Nifty recorded their sixth straight week of gains by rising 393.27 points or 1.02 per cent, and 123.40 points or 1.07 per cent, respectively.
The rupee also fell against the pound sterling
to finish slightly lower at Rs 92.12/14 per pound.

ChiniMandi - Wednesday, 1 December 2021
Sugarcane crushing season has picked up pace in Maharashtra's Pune region. According to the sugar commissionerate, 27 sugar mills in the Pune division have...

Petrol in Delhi to get cheaper nearly by Rs 8 after Kejriwal govt reduces...

ChiniMandi - Wednesday, 1 December 2021
On the eve of Diwali this year, the Centre cut excise duty by Rs 5 per litre on petrol and Rs 10 per litre on diesel to bring down the retail prices across the country.