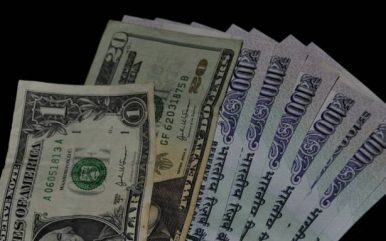 Mumbai, Sep 7 (PTI) The rupee Friday staged a turnaround to close higher by 26 paise at 71.73 against the US dollar, snapping its seven-session losing streak after heavy intervention by the Reserve Bank.

Weighed down by trade concerns and rising crude prices, the Indian currency breached the 72 mark to trade at 72.04 to the dollar in morning trade.

However, heavy intervention by the RBI predominantly resisted the rupee’s sharp depreciation and helped it rebound from record low levels.

Some calm returned to forex front with sentiment soothed by positive comments and confidence-building measures from the government after what was described as carnage.

Steady crude oil prices and a relief on the trade front as the US did not slap duties on USD 200 billion of Chinese goods after the passing of a deadline for a public consultation eased pressure on the local currency.

The battered rupee lost a whopping 189 paise in the last seven trading sessions which resulted in the worst sell-offs in the forex history.

The rupee resumed higher at 71.95 from overnight level of 71.99 at the inter-bank foreign exchange (forex) market on bouts of dollar selling by state-run banks.

However, intense volatility pushed the rupee to break the 72-mark to hit a low of 72.04 on an intraday basis.

But, the local unit quickly bounced back to trade in positive terrain following central bank intervention. It later touched a session high of 71.65 before ending at 71.73, revealing a gain of 26 paise, or 0.36 per cent.

The Financial Benchmarks India private limited (FBIL), meanwhile, fixed the reference rate for the dollar at 71.9009 and for the euro at 83.6744.

In the cross-currency trade, the rupee recovered against the euro to settle at 83.25 from 83.70 yesterday.

The Indian currency stands out as one of the most vulnerable and worst performing currency in Asia this year so far with a steep 13 per cent fall in value against the resurgent dollar bulls.

Hardening concerns over slowing capital flows and a wider trade deficit could stretch the funding of India’s current account gap due to lower-than-expected goods and services tax collections increased volatility uncertainty in the midst of Trumps geopolitical mess and contagion spreads.

While inflation risks have increased on high oil prices raising the probability of faster hikes in interest rates by the RBI.

Globally, the US dollar traded modestly higher against major trading rivals as investors prepare for the jobs report later in the day.

Against a basket of other currencies, the dollar index was higher at 95.28

In forward market today, premium for dollar softened due to sustained receiving from exporters.