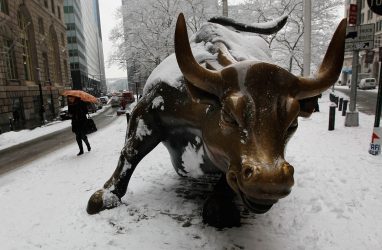 Mumbai, Dec 6 (PTI) The BSE benchmark Sensex cracked over 300 points and the NSE Nifty fell below 10,700 in early trade Thursday on heavy selloff in metal and oil stocks ahead of the Opec meeting to discuss production policy, amid weakness in Asian equities. Global investor sentiment was weak as the chances of peaceful trade negotiations between the US and China dimmed on news that Huawei chief financial officer Meng Wanzhou had been held in Canada and faces extradition to the United States over alleged Iran sanctions breaches by the firm.
The 30-share Sensex was trading 298.53 points, or 0.83 per cent, lower at 35,585.88. The index tumbled 249.90 points, or 0.69 per cent, to close at 35,884.41 on Wednesday.
In similar movement, the NSE Nifty was trading 94 points, or 0.87 per cent, lower at 10,688.90.
All sectoral indices were trading with losses, led by metal, oil and gas, realty, FMCG, auto and banking stocks. Top losers include Vedanta, Bharti Airtel, Tata Steel, Yes Bank, Maruti, IndusInd Bank, ONGC, ICICI Bank, Tata Motors, Kotak Bank and NTPC, falling up to 3 per cent.
While, gainers include Sun Pharma, PowerGrid and L&T, rising up to 2 per cent. Domestic investor sentiment was also weak after the Reserve Bank of India (RBI) Wednesday expectedly kept interest rates unchanged.
“From a market stand point, the expectation of a more accommodative view from RBI, in line with similar view on the US Fed rate trajectory was a disappointment, which explains the post announcement volatility,” said Dhananjay Sinha, Head of Research, Economist & Strategist, Emkay Global Financial Services.
On a net basis, foreign portfolio investors (FPIs) sold shares worth Rs 357.82 crore Wednesday, and domestic institutional investors (DIIs) were net sellers to the tune of Rs 791.59 crore, provisional data available with BSE showed.
The rupee, meanwhile, opened 33 paise lower at 70.79 against the US dollar in early trade. Oil prices extended losses ahead of the meeting of Opec and non-Opec production companies. Brent crude, the international benchmark, was trading 0.83 per cent lower at USD 61.05 per barrel.
Elsewhere in Asia, Hong Kong’s Hang Seng was down 2.26 per cent, Japan’s Nikkei fell 2.06 per cent and Shanghai Composite Index edged lower by 1.28 per cent in early trade.
Wall Street was closed for trade on Wednesday. the Dow Jones Industrial Average index cracked 799.36 points, or 3.10 per cent, to 25,027.07 on Tuesday.