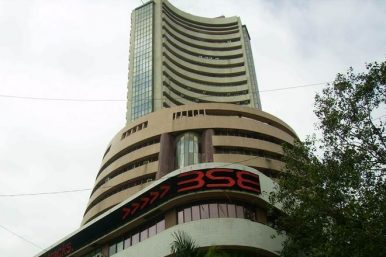 The gauge has lost 1,249.04 points in the previous four sessions.

Sectoral indices led by realty, consumer durables, auto, banking and healthcare were trading in the negative zone, falling up to 1.66 per cent.

Shares of Dewan Housing Finance Corporation rebounded nearly 25 per cent to Rs 438.75 after the company stated that it had not defaulted on any bonds or repayment nor had there been any single instance of delay on any of its repayment of any liability.

The company’s shares had tumbled 42.43 per cent in the previous session on Friday following massive selling over fears of a liquidity crisis.

Brokers said market sentiment remained weak in the absence of any encouraging factor and fresh weakness in the rupee, coupled with rising global crude oil prices, which again went past the USD 79 per barrel mark.

The rupee depreciated 29 paise to 72.49 against the US dollar at the interbank forex market.

Foreign portfolio investors (FPIs) bought shares worth a net of Rs 760.70 crore, while domestic institutional investors (DIIs) made purchases to the tune of Rs 497.03 crore on Friday, provisional data showed.

Elsewhere in Asia, while Japan and Chinese markets were shut Monday on account of a public holiday, Hong Kong’s Hang Seng fell 1.29 per cent.

The Dow Jones Industrial Average, however, gained 0.32 per cent to end at record high Friday.