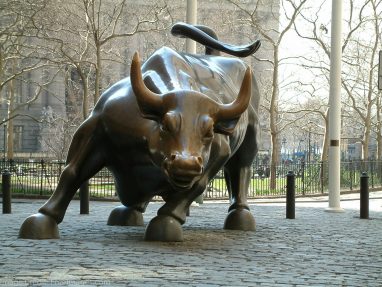 Mumbai, Dec 20 (PTI) Benchmark indices fell sharply in early trade Thursday on weak global cues after the US Federal Reserve raised its key interest rate for the fourth time this year, and signalled more, but slower pace of rate hikes next year.
After opening over 250 points down, the 30-share Sensex was trading 166.63 points, or 0.46 per cent, lower at 36,317.70. The index had ended 137.25 points, or 0.38 per cent, at 36,484.33 Wednesday.
The NSE Nifty, too, was trading 56.70 points, or 0.52 per cent, lower at 10,910.60.
Domestic stocks followed US and other Asian stocks that fell sharply after US Fed lifted the benchmark rate. Wednesday’s quarter-point increase, to 2.25-2.5 per cent, lifted the Fed’s key rate to its highest point since 2008.
The Fed’s move came despite US President Donald Trump’s attacks in recent weeks on its rate hikes and on Chairman Jerome Powell personally. The president had complained that the moves are threatening the economy.
At a news conference after the Fed’s announcement, Powell said Trump’s tweets and statements would have no bearing on the central bank’s policymaking.
Metal index was the biggest loser on both exchanges, followed by banking and auto indices.
Top losers include Vedanta, NTPC, Bharti Airtel, HDFC, Wipro, PowerGrid, Infosys, Maruti, Adani Ports and Kotak Bank, falling up to 2 per cent.
While, gainers include Asian Paints, Yes Bank, M&M, Sun Pharma and Axis Bank, rising up to 2 per cent.
On a net basis, foreign portfolio investors (FPIs) bought shares worth Rs 1,209.21 crore Wednesday, and domestic institutional investors (DIIs) were net sellers to the tune of Rs 481.46 crore, provisional data available with BSE showed.
The rupee, meanwhile, weakened against the US dollar, and was trading at 70.54 a dollar.
Global oil prices eased further. Brent crude, the international benchmark, was trading 1.42 per cent lower at USD 56.43 per barrel.
Elsewhere in Asia, Hong Kong’s Hang Seng was down 1.11 per cent, Japan’s Nikkei fell 2.23 per cent and Shanghai Composite Index edged lower by 0.82 per cent in early trade.
The US Dow Jones Industrial Average ended 351.98 points, or 1.49 0.35 per cent, lower at 23,323.66 Wednesday.