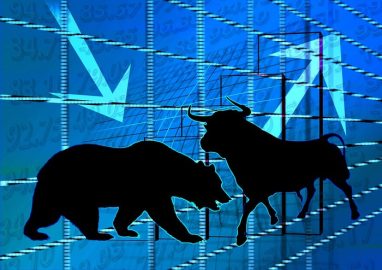 Mumbai, Jan 23 (PTI) Equity benchmark Sensex Wednesday tumbled over 336 points to end at 36,108 on emergence of intense selling towards the fag-end mainly in FMCG, financial and IT stocks, while renewed concerns over US-China trade tiff further jolted investors’ sentiment.

In the Sensex pack, ITC Ltd emerged as the biggest loser with its shares plunging 4.16 per cent after the company’s quarterly results failed to enthuse investors.

Other top losers on the index were PowerGrid, Infosys, Mahindra and Mahindra and NTPC — falling as much as 1.85 per cent.

Traders said market remained range-bound for the better part of the session as investors kept their exposure at a low ebb due to weak global cues.

Towards the fag-end, the selling pressure gathered momentum after European markets opened in the negative zone.

However, some recovery in rupee amid slide in global crude brought some respite for domestic bourses that were otherwise appeared facing headwinds.

Global shares traded on a mixed note with a negative bias due to concerns over the state of ongoing US-China trade negotiations, amid reports that the White House has cancelled a trade planning meeting with Beijing this week.

“Market continued to trade on the downside as absence of major surprise from the quarter earnings failed to give direction. Investors are taking a cautious approach given their focus on global headwinds and upcoming general election. While FIIs are sellers in the market, expectation of slow pace in US FED rate hike and possibility of rate cut in India will ease liquidity crunch in the market,” Vinod Nair, Head of Research, Geojit Financial Services Ltd.

Other than ITC, other laggards include PowerGrid, Infosys, M&M, NTPC,

Among the winners, Sun Pharma continued to remain top performer, spurting 3.04 per cent, followed by Yes Bank at 2.71 per cent.

While Metal index topped winner by surging 0.63 per cent, while healthcare gained 0.44 per cent.

In the broader markets, the mid-cap index and small-cap index fell up to 0.28 per cent.

European shares too were in negative zone in their ealy deals with Frankfurt’s DAX falling 0.49 per cent and Paris CAC 40 down 0.39 per cent. London’s FTSE fell 0.50 per cent.