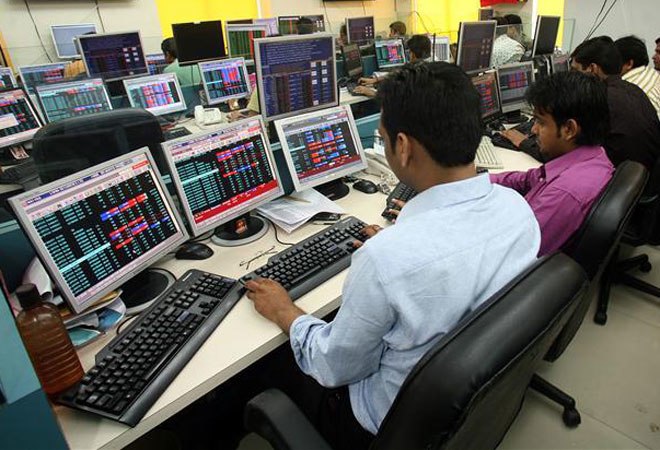 The gauged had gained 691.38 points in the previous four sessions, powered by a sharp rally in IT bellwether TCS following strong quarterly results.
The 50-share NSE Nifty rose 77.35 points, or 0.71 per cent, to 11,025.65.
An appreciating rupee, heavy buying by domestic institutional investors (DIIs) and encouraging start to the earnings season contributed to the uptrend, brokers said.

Investors are also optimistic ahead of the release of index of industrial production (IIP) and inflation data, scheduled to be released later in the day, they added.
Banking stocks were the biggest sectoral gainers led by BoB rising up to 2 per cent followed by SBI, Yes Bank, ICICI Bank, Axis Bank, HDFC Bank and IndusInd Bank.

Shares of Reliance Industries was trading 2 per cent higher at Rs 1,057.05.
Other prominent gainers include Maruti Suzuki, HUL, Kotak Bank, HDFC, Coal India, ITC and Bajaj Auto, rising up to 1.17 per cent.
Meanwhile, foreign funds bought shares worth a net of Rs 636.27 crore, while DIIs made purchases worth a net of Rs 15.33 crore on yesterday, provisional data showed.

US stocks, however, fell yesterday amid renewed tensions over global trade and geopolitics. The US Dow Jones Industrial Average ended 0.88 per cent lower last night.