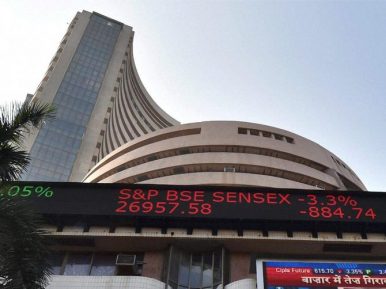 Mumbai, Sep 24 (PTI) Market benchmark BSE Sensex tanked nearly 537 points to end at over two-month low of 36,305.02 and the Nifty crashed below the 11,000-mark Monday, extending their slide for the fifth straight session after heavy losses in banking and auto stocks.

Reports of liquidity concerns following the default in repayment of loans by diversified IL&FS group spooked investors even as losses in global markets on reports that China had called off planned trade talks with the US in the wake of a new round of duties weighed on the market sentiment.

Mahindra and Mahindra fell the most by 6.46 per cent among 30 Sensex stocks while Maruti and Bajaj Auto decline by 3 per cent and 1.7 per cent respectively.

Yes Bank fell by another 0.35 per cent, taking its total losses to more than 29 per cent after the RBI curtailed the term of its founding CEO Rana Kapoor.

Bucking the trend, IT stocks TCS and Infosys rose by 4.5 per cent and 1.5 per cent. Coal India rose by 2.1 per cent while Reliance gained 1.27 per cent.

Sentiments remained distinctly weak in sync with declining global markets as the intensifying dispute between the world’s two biggest economies has spooked financial markets worried about the fallout on global growth, brokers said.

The Reserve Bank of India (RBI) and market regulator Sebi said on Sunday that they were closely monitoring the developments in the financial sector and were ready to take “appropriate actions” to calm the jittery investors.