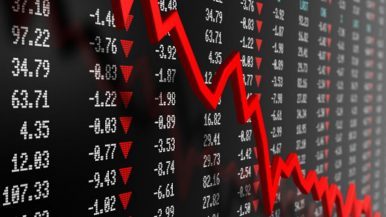 The international benchmark Brent crude breached the US 86 per barrel level, nearing its four-year high.

The gauge had lost nearly 550 points in the previous session Wednesday.

Brokers said weakness was seen in most Asian markets as high US yield and good economic data led to fear that investors would move to the US, dampened trading sentiments here.

The rupee’s plunge to a new record low of 73.77 against the dollar by falling 44 paise in early trade, too, weighed on investor mood.

Commerce and Industry Minister Suresh Prabhu will hold an inter-ministerial meeting later in the day to discuss trade deficit and its impact on rupee as well as ways to boost exports, an official told PTI.

Foreign portfolio investors (FPIs) bought shares worth a net of Rs 1,550 crore, while domestic institutional investors (DIIs) made purchases to the tune of Rs 1,402 crore Wednesday.

Elsewhere in Asia, Hong Kong’s Hang Seng, Japan, Singapore and Taiwan were trading sharply lower by falling over 1 per cent.

The US Dow Jones Industrial Average, however, ended 0.20 per cent higher Wednesday.