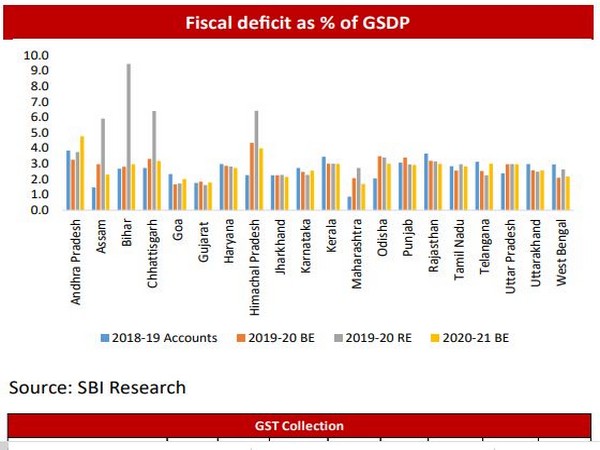 Mumbai (Maharashtra) [India], August 24 (ANI): States are likely to face uncovered losses of up to Rs 3.1 lakh crore in the current financial year due to massive disruption caused by COVID-19 pandemic, according to a report by State Bank of India (SBI) released on Monday.

A very basic assumption of loss of an entire month’s revenue in components like state value added tax, excise, stamps and registration will bring down the revenue for Q1 FY21 at around Rs 53,000 crore.

Combining this estimate with the loss in State Goods and Services Tax estimate in Q1 shows that major states are going to loss around Rs 1.2 lakh crore in the first quarter itself, translating into an annual Rs 3 lakh crore loss.

“We estimate an additional Rs 1.5 lakh crore revenue loss from the Centre. Taking into account the additional expenditure of states of Rs 1.7 lakh crores, the total loss thus comes to around Rs 6.2 lakh crore for the major states,” said the SBI Ecowrap report.

However, of the increased state borrowing limit of Rs 4.28 lakh crore, states will be able to borrow an additional Rs 3.13 lakh crore owing to the conditions set by the Centre, it said.

Only eight states were in a position to fulfill all the conditions for the additional borrowing at 2 per cent of gross state domestic product (GSDP), according to the report, which leaves the states with an uncovered annual loss of Rs 3.1 lakh crore on aggregate.

In May, as part of the Atmanirbhar Bharat package, the Centre permitted additional state borrowing over the existing 3 per cent of GSDP limit. This was subject to conditions linked to universalisation of One Nation-One Ration Card, ease of doing business, power distribution and urban local body revenues.

While total GST collections for the first quarter stood at 59 per cent of the revenue collected during the same period last fiscal, the overall SGST and allocated Integrated GST was Rs 64,703 crore or 47 per cent less than the revenue in FY20.