Home All News Sugar Export Push of Government May Not Work 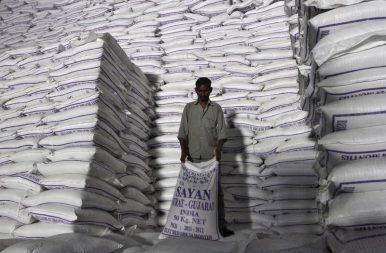 ChiniMandi: Uttar Pradesh still owes Rs.12,988 Cr to their farmers. These farmers were among the groups who were prevented to enter Delhi on 2nd October. The indeed have a reason to be unhappy as their dues aren’t paid. But, one cannot blame mills. The sugar industry is in liquidity crisis due to surplus production and low prices of sugar.
The statement was issued government was to detail a package cleared by the Cabinet Committee on Economic Affairs last week in order to give some relief to the sugar sector. Its indeed a good move but it might not work.

As per the details of the package, it has two parts: first being, assistance for internal transport to easily export the sugar worth Rs.1375 Cr. And the fixed price of Rs.13.88/qtl. of crushed sugarcane in the year 2018-19 season worth Rs 4163 Cr. This export push decision is taken by the government to solve the glut in industry. According to reports, this year’s sugar production is expected to increase to 35.5 million tons from 31.5 million tons.
Last years (2017-18) domestic consumption of sugar went up to 25 million tons according to reports.

The total export of sugar has come down significantly in the last two years this is due to the lower international sugar prices.
This year, the government allocated mill wise MIEQ of two million tonnes of sugar for export. Considering the production of each mill, a fixed amount of sugar is allocated to each mill for export.

According to Sanjay Banerjee from ISMA, the domestic industry has not been able to clear event 30% of the given target due to low sugar prices in the international market. Given this context, the latest policy may not be helpful in solving the continuous issue in the industry which ultimately keep the farmers angry.