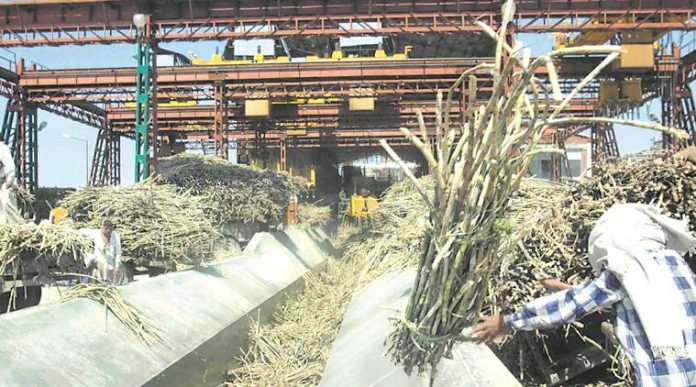 Sugar factories in the State have been complaining that they are unable to freely sell sugar in the open market or pay farmers because of what they say are the Centre’s restrictive policies.

The bailout package for the sugar industry, along with the Centre’s sugar release mechanism, makes sugar trade unviable, they say. Sugar factories owe an estimated ₹1,900 crore to farmers in the State.

Under the present policies, they have to buy sugarcane at government fixed prices and sell a fixed quantity of sugar within a fixed price range. This, they say, is crippling their business and pushing them into losses.

Factories list their problems as the Centre’s control on the sale price, the minimum procurement price, and the prescribed quantum of sale of factories.

Representatives of sugar factories have appealed to Chief Minister H.D. Kumaraswamy to press the Centre to allow free sale and export of sugar.

One factory has approached the High Court of Karnataka against the Centre. The Karnataka government’s State Advised Price — at which factories must buy cane from farmers — is ₹2,750 for the last crushing season. This can go up to ₹2,900 for factories with higher rates of recovery. This is higher than the Centrally recommended fair and remunerative price (FRP) of ₹2,550 per quintal.

The factories allege that the Centre intervenes whenever the price of sugar crosses ₹35 per kg in the wholesale market, as it wants to keep rates under control. In the retail market, sugar currently sells at ₹32 to ₹40 a kg. Factory managers say they are being driven to losses by a regime that makes them “buy high and sell low”.

“This is a very small window for us to operate. Unless it is widened, factories will continue to suffer,” said a sugar factory owner from Bagalkot, who is a member of the Indian Sugar Mills Association (ISMA). His factory owes around ₹250 crore to farmers.

The sugar release mechanism fixes the buffer stock of each factory at 10% of its total production. The rest is the sale quota that must be exhausted within 12 months.

Most of these policies, except the minimum sale price, have been there for decades. The lower limit of ₹29 was fixed this year. However, high production in the State in 2017-18 worsened the situation.

“There is no measure to assume what is the maximum sale price. This seems to be a psychological barrier,” said Siddharth Wadannavar, managing director of Belgaum Sugars in Belagavi.

“The government should fix the sale prices in proportion to the prices we are supposed to pay farmers,” said Sanjay Kheny, chairman of the Bidar SSK, a cooperative sugar factory. According to him, the sale price of sugar should be ₹500-₹700 above the FRP in order to ensure smooth functioning of factories.

Naseemoddin Patel, a member of ISMA, alleges that the Centre lacks clarity on the issue.

“The government fixed a minimum sale price of ₹29 per kg of sugar, but it is worried when the price crosses ₹35 per kg. Once the price barrier is crossed, it stops sale of sugar, allows imports or restricts exports. That is against the interest of factories. The government should find a balance between the interests of farmers and those of the middle class families, which panic when sugar prices rise,” he said.

Prakash Khandre, former MLA and JD(S) leader, who owns the Bhalkeshwar sugar factory, objected to the sale quota system. “How are we to pay farmers in two weeks when the sale quota is to be achieved over 12 months and when factories run only for six months a year?” he questioned.

In contrast to sugar mill owners, cane growers’ leaders do not buy the argument that factories are running under losses. “If all factories are making losses, why does every small politician want to open a sugar factory?” wondered Baba Gouda Patil, president of the Karnataka Farmers’ Federation. “The number of factories in the country has doubled in the last two decades. In Uttar Pradesh, it has grown three times,” he said.

According to him, factories are making huge profits by adopting unfair means. He alleged that they under-report their recovery and hide profits; they regularly share profits among members of the governing body, but are unwilling to do so with farmers.

“Many factories have diversified into co-generation of power, production of fertilizer, molasses, bagasse [the fibrous leftover after cane is crushed] and press mud. Some have also opened distilleries to make alcohol. But farmers don’t get a share in the revenues of diversification. They are given money only for sugar sales,” Mr. Patil said.

Sources in the State sugar commissionerate say they have no clear information on the sale of sugar or the stocks left with factories this season. It will be collected before the beginning of the next season, a senior officer said. “Two years back, we seized nearly half of the stocks. But we were unable to sell it. As of now, there are no plans to seize sugar from factories to pay farmers,” he said.

Recently , the Centre defended its stand in the High Court of Karnataka. It claimed that the minimum sale price and the stock holding limits had created a level playing field and had actually increased the price of sugar in the market.