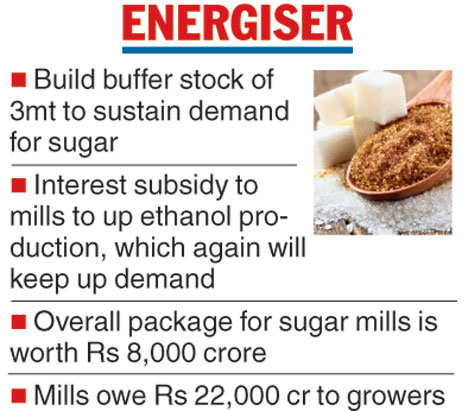 he government plans to create a buffer stock of 3 million tonnes (mt) of sugar and extend soft loans to mills for ethanol production as part of measures to prop up the sugar prices and help the mills to clear cane dues of Rs 22,000 crore.

“A proposal of Rs 8,000 crore has been sent to the cabinet, which will take a decision,” food minister Ram Vilas Paswan told reporters, while highlighting his ministry’s achievements in the last four years.

The bailout package has been worked out days after the BJP lost a Lok Sabha bypoll in Kairana in Uttar Pradesh, the country’s largest sugarcane producer.

The minister added that a decision in this regard may be taken very soon.

Paswan, however, did not give details even as he refuted suggestions the package is linked to the reverses faced by the ruling party in the recent byelections, especially in Uttar Pradesh.

According to sources, the Union cabinet is scheduled to meet on Wednesday.

A bailout package has been worked out as sugar mills’ financial health has worsened due to a sharp fall in prices following record sugar production of over 31.6mt so far in the 2017-18 marketing year (October-September).

The proposed Rs 8,000-crore package includes the creation of a buffer stock of 3 mt and an interest subsidy of Rs 4,500 crore on loans to mills to produce more ethanol. The ethanol scheme, sources said, provides five years to mills to repay their loans, with a moratorium on repayment in the first year.

The Centre is likely to persuade the state finance ministers in the GST council to cut the GST tax rate on ethanol to 5 per cent from 18 per cent to provide relief to the mills. The council has set up a group of ministers to discuss the issue of sugar cess.

The petroleum ministry is looking at raising the ethanol price from the existing Rs 40.85 per litre by another Rs 6-7 a litre so that the mills can makes payment to farmers at the earliest.

Last month, the government had announced a Rs 1,500-crore production-linked subsidy for sugarcane farmers to help millers pay for the cane.

Presently, the average ex mill price is in the range of Rs 25.60-26.22 per kg, which is below the cost of production.

The Centre has already doubled the sugar import duty to 100 per cent and scrapped the export duty.