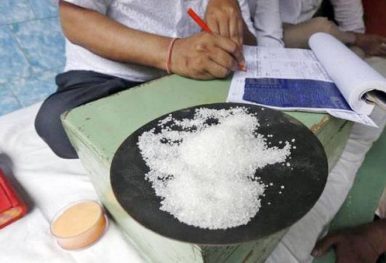 New Delhi, Sep 14 (PTI) Shares of sugar companies jumped as much as 20 per cent in morning trade Friday after the government raised ethanol price for blending in petrol by 25 per cent.

The government Wednesday approved an over 25 per cent hike in the price of ethanol produced directly from sugarcane juice for blending in petrol in a bid to cut surplus sugar production and reduce oil imports.

The Cabinet Committee on Economic Affairs raised the procurement price of ethanol derived from 100 per cent sugarcane juice to Rs 59.13 per litre from the current rate of Rs 47.13.

This is the second consecutive session that sugar stocks have registered handsome gains. Earlier on Wednesday, the sugar stocks had zoomed as much as 18 per cent on BSE.

The government’s move of raising ethanol price for blending in petrol by 25 per cent would help sugar mills quickly release arrears of cane farmers, which stands at over Rs 13,000 crore. As much as 40 per cent of these dues are in Uttar Pradesh alone.

Ethanol so extracted would be doped in petrol to cut reliance on imports. The government is looking at scaling up the blending to 10 per cent in the next couple of years from 4-5 per cent now.

Molasses is a viscous product resulting from refining sugarcane or sugar beets into sugar.

Since 2014, the government notified an administered price for ethanol. The move significantly improved the supply of ethanol during the past four years.