Home English Indian Sugar News Sugarcane bagasse as a dietary fibre can be a good option to... 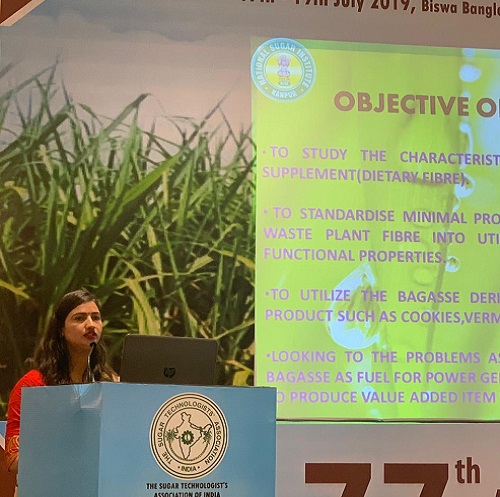 Kolkata: About 30 to 32% of bagasse is produced from 1 ton of sugarcane. Since bagasse is a by-product of the cane sugar industry, the quantity of production is in line with the quantity of sugarcane produced. Bagasse is the fibrous residue of the cane stalk left after crushing and extraction of juice. It consists of fibre, water and relatively small quantities of soluble solids mostly sugar. A typical chemical analysis of bagasse (on dry weight basis) is cellulose 26 to 43 percent, hemicellulose 17 to 23 percent, lignin 13 to 22 percent and ash 1 to 4 percent.

Speaking at the 77th Annual Convention, Ms. Neelam Chaturvedi – a research scholar shared her insights on how sugarcane bagasse can be a rich source of dietary source fibre. She expressed her views that, “The major limitation of the fibre is its low digestibility which is due to association of lignin with cellulose and hemicellulose. Lignin reduces the digestibility of cellulose and hemicellulose by physically protecting them against enzyme degradation. To overcome this difficulty a number of chemical and biological treatments have to be done for delignification. The bagasse sample for research purpose was procured from the Sugar Factory of National Sugar Institute. From the analysis carried out in the study, sugarcane bagasse fibre can be considered as an alternate source for dietary fibre for fortification. As we know that dietary fibre has been claimed as a functional ingredient which is useful in nutraceutical formulations in the management of lifestyle disorders. Use of cereal bran, vegetable and fruit peels, as a source of dietary fibre is already in practice. Hence, bagasse fibre can be commercially exploited for human consumption.”

“Generally, all these fibres cannot be consumed raw and thus to have to be processed, to make fit for human consumption. The findings of the study carried out strongly supports bagasse as a good source of dietary fibre which can be successfully incorporated in food products and further efficacy of fibre fortified products developed may be confirmed through clinical trials. Alternate sources like bagasse fibre still needs more exploitation as it is a by-product of sugar industry, once commercialized it can be better option which may be the source to increase the revenue of sugar mills.” she further added.