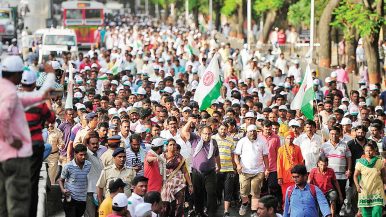 ChiniMandi: Swabhimani Shetkari Sanghatan recently asked the Govt. of Maharashtra for cane price to be fixed at Rs.3217 per ton during the ‘Sugarcane Convention’ at Jaysingpur. Mr.Raju Shetti claimed that unless and until the demands are not fulfilled, sugar mills will not start working.

Sugarcane cutting at Kolhapur region, Karnataka – Maharashtra borders were forcefully stopped. Karnataka’s sugar mills in Kagal, Chikodi area have initiated sugar cutting. According to the Sanghatan, nobody cares about the profit which a farmer earns behind cane cutting. Whereas, in Karnataka, Kisan Sanghatan has asked not to import sugarcane from Maharashtra sugar mills. If Govt. fails to give a positive reaction over demands, then the strike could take up a bad turn.