Home All News “The Government Should Use Ethanol Pricing As The Leverage For Absorption Of... 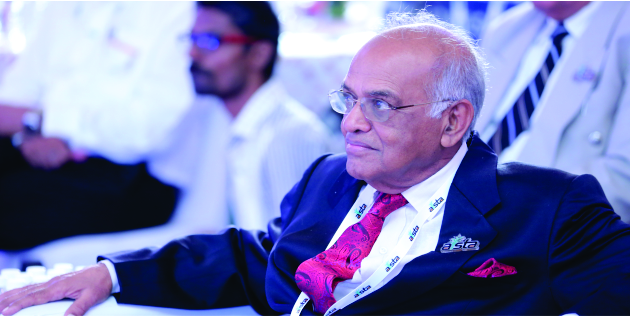 Government has allowed 10% ethanol extracted from sugar cane in petrol, yet supplies have remained a concern & targets have never been achieved. What are your views on it?

In my view, 10% ethanol blending of Petrol in India is not feasible, given the present structure. We should be happy if the level of 4 to 5% is achieved.
First, the potential availability of total alcohol from molasses during 2015-16, 2016-17 and 2017-18 stands at 2.7, 2.5 and 2.75 billion litres, whereas the quantity of ethanol required at 10% level of blending is 3 b litres. That is because the Indian blending programme is primarily designed for sourcing ethanol from molasses. It is nobody’s case that the entire availability of alcohol from molasses should go to ethanol as there are competing uses like chemicals and potable use, the latter having virtually no demand elasticity of price and additionally enjoying support from state governments being their main source of revenue.
Second, taxes and vexatious regulations on licensing and movement on sale of ethanol imposed by the States, act as serious impediments in realising the full potential of the programme.
For instance, during the current year, the oil marketing companies have placed orders for 1.25 b litres of ethanol. Besides a new tender of 1.12 b litres is right now under process. But the lifting till mid-Feb is reported at measly 169 m litres or just 14% of the quantity contracted under the first contract.
The policy prescriptions flow from the above analysis. It is necessary to fix ethanol prices at a level at which not only ethanol from B Heavy molasses, from which extraction of sugar is not a cost effective proposition, but even from sugarcane juice gets priced-into ethanol. Moreover, removal of state taxes and rationalisation of licensing and movement restrictions by States are needed. These two steps will help realise the potential of the sector.

Production numbers are high, what kind of long term policy should the government think about?
Since the year 2009, the sugar production continues to rise, punctuated of course by stray weather events. That was the year from which FRP has replaced SMP for sugarcane. On top of that some States like UP impose a higher price by way of SAP.FRP/SAP structure incentivises sugarcane production heavily. Sugarcane is the highest paying crop in India as compared to alternative crops and its production is programmed to go on increasing continuously. India’s sugar production, thus, being a high cost one, cannot generally compete in the world market, condemning this industry to seeking subsidies for stock holding or exports in perpetuity. The revenue share formula is considered a solution, but so long as FRP/SAP is treated as the minimum price, even implementation of the revenue share would not be able to solve the problem .That is because whenever low sugar prices justify sugarcane prices lower than FRP, mills will still be forced to pay the FRP/SAP, which means the incentive prices would continue to drive the production higher and higher.
In the medium term, the Govt should use ethanol pricing as the leverage for absorption of production of sugar more than demand. In years of surplus the ethanol prices can be so fixed so as to divert sugarcane juice to ethanol to fill the headroom in ethanol demand, which appears to be 1.5b litres in order to achieve the 10% target at present as we see from the analysis above. Conversely, if the sugar availability is estimated at be tight, the price of ethanol can be lowered so that it does not pay for mills to divert sugarcane juice to ethanol production.

Up to what extent would the influence of International Trading Houses be on sugar companies in India & how far would it impact the Indian market?
The global trade houses have now been around now for over 20 years in the sugar sector. They benefit the domestic trade and industry in three ways. First, they create a trained pool of manpower, which is elevating the benchmark of commercial manpower across the sector. Second, by their advent, the international markets are no longer a black box, which they used to be for the domestic sector till the 90’s. Thirdly, they have strong internal commercial and financial discipline, the rub-off effect of that is seen on the domestic companies having dealings with them.

Which rate of sugar falls into the comfort zone of the government to maintain demand & supply equal & what measures need to be taken to keep the balance consistent?
The comfort zone of price is the level at which the industry earns enough to be able to pay the farmer for the sugarcane. The current FRP is Rs 255 per quintal @ 9.5% recovery, which translates to a sugar price of Rs 3300 per quintal, on an average, using the tariff commission formula. Firstly, this formula doesn’t consider the financial costs of heavy debt the sugar mills have on their books. Secondly, the market is dynamic. So let’s talk of a range. I would presume the comfort zone to be Rs 3300 to 3500 per quintal.
Should the market forces be permitted free play, of which I am an ardent votary, the prices would drop in a surplus year, in absence of export demand, to a level to signal a cutback in planting, in the process taking the sector through the pain that such price drop would bring along. In a year of shortfall in production, on the contrary, free market would signal increase in cane production through appropriate increase in price of sugar.
We know, however, that we don’t have an important ingredient of free market in terms of freedom in cane pricing in view of FRP and SAP (imposed by some states like UP) on sugarcane. Once the Govt mandates the sugarcane price, then it becomes its duty to ensure that sugar prices are maintained at the level which is remunerative for mills to be able to pay the same. Hence it is inevitable that subsidies for stock holding and exports are given to keep the balance consistent. At the other end is the consumer. Since free market would lead to rise in sugar price to a level at which consumers begin to protest, the govt is bound to intervene through imposition of stockholding limits and waiver of import duty, thus interfering with the play of market forces. I presume there is no alternative but to purse such policies of “ying” and “yang” so long as the FRP is there, which is a political hot potato.