Czapp Insight Focus
The link between carbohydrates and diabetes is much debated. The narrative around sugar’s impact on health may be too simplistic. Government policies that target sugar in isolation might not lead to drastically improved health outcomes.

Sugar and Health: The Great Debate
As a result of advances in healthcare, populations in many parts of the world are living longer and communicable diseases can be managed much more effectively. Noncommunicable diseases (NCDs) are therefore a growing concern. With an increase in disposable income over the years, the prevalence of NCD deaths has steadily increased. It now stands at about 0.53% of the global population, equating to just under 41 million people in 2019.

What is Type 2 Diabetes?
We all know that sugar has been associated with Type 2 diabetes, but many of us don’t know why. Glucose powers the cells that make up our muscle and tissues. When we eat, the body turns certain foods into glucose, which enters the bloodstream. The insulin created by our pancreas helps it to penetrate the cells, generating energy. When someone develops insulin resistance, this process does not work as smoothly. The glucose fails to penetrate the cells and ends up building up in the blood stream – otherwise known as high blood sugar. Having high blood sugar for a prolonged period can lead to Type 2 diabetes. 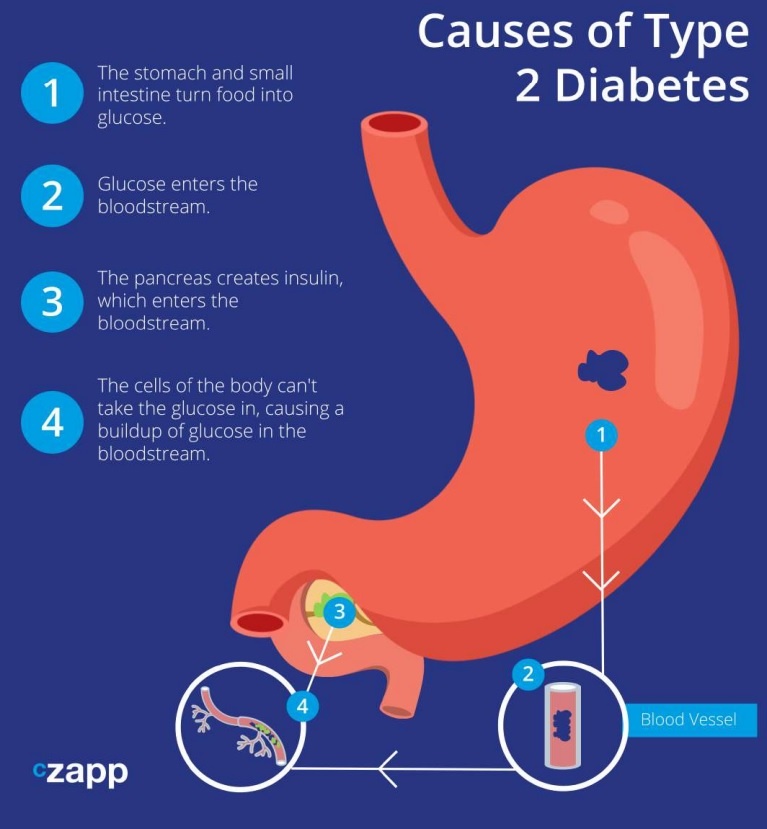 The exact cause of insulin sensitivity is unclear, but scientists know it’s related to a variety of factors, including genetics, ageing and ethnicity. Other risk factors for developing insulin resistance are excess body weight, too much belly fat, lack of exercise, smoking and lack of sleep. It’s important to note that glucose does not only come from sugar, but also from grains, fruit, vegetables, and dairy products. The reason why sugar gets so much focus in contributing to diabetes is because it’s a simple carbohydrate; it significantly increases calorie content without providing much nutritional benefit. And because the body quickly digests sugar, we’re often left feeling hungry again after a short period, which can lead to overeating.

The Link with Sugar
Scientists and researchers have conducted a myriad of studies to uncover any potential link between sugar and Type 2 diabetes. Rather than delving into the science (we’ll leave that to the experts), we want to look at the consumption data we have at our disposal to examine the correlation – or absence of a correlation – with health outcomes. Below is a selection of countries categorized by their per capita sugar consumption and diabetes prevalence. 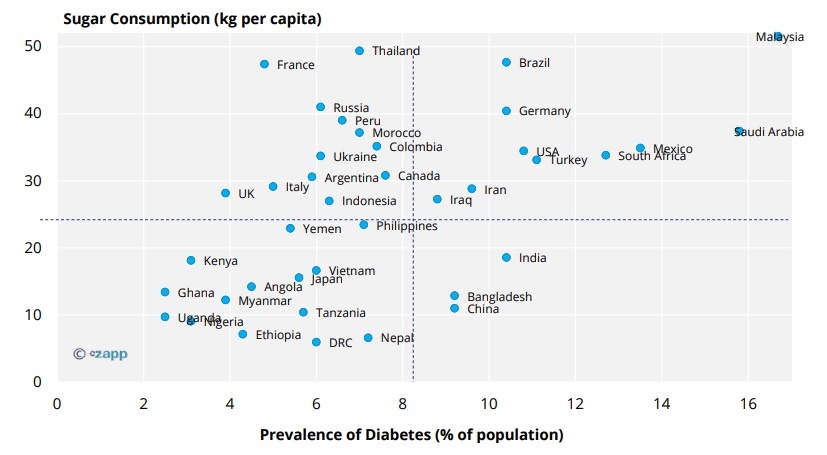 In India, diets tend to be very heavy in carbohydrates such as rice and flour. There’s also a growing consumption of processed foods and a lower-than-recommended intake of legumes and tree nuts.

A False Correlation?
We know overconsumption of any food is detrimental to health, and we know that rising incomes tend to lead to an increase in caloric intake as food becomes plentiful.

Likewise, the link between sugar and diabetes is less clear in countries such as Australia, where per capita consumption has been dropping from a high level for over 15 years. In 2004, consumption topped 50kg per person per year and is now at around 42kg per year. However, diabetes prevalence continues to rise, going from less than 4% to about 5.5% in the same period.

It should be noted that these consumption levels, although dropping, are still very high in relation to the global average. It could be the case that, while levels are dropping, sugar consumption is still too high to see a corresponding drop in Type 2 diabetes. That said, the prevalence of diabetes in Australia’s is relatively low (5%) for such high levels of sugar consumption, especially given the world average of 8.8%. Of course, it could just be the case that there’s a time lag in the data. Perhaps the dropping sugar consumption has not yet had time to have a demonstrable impact on health, given that 20 years is a very short period to make meaningful changes to outcomes.

The Answer to the Data Lag
We know there’s no known cure for diabetes, which could explain the increasing global prevalence. Perhaps diets are becoming lower in carbohydrates, but the health data does not reflect this because lifespans are longer, meaning there are more people living with diabetes. Also, given the lack of historical data on diabetes prevalence beyond the 1990s, it may be useful to examine the prevalence of obesity instead, considering the implied links between the two. In the UK, the data again shows a decline in per capita sugar consumption since about the late 1970s, but over this time, the prevalence of obesity has consistently risen.

And, even as sugar consumption is going down, people in the UK are still gaining weight. Average BMI across both males and females has increased by about three basis points since 1975.

The prevalence of overweight children is also increasing, but a 2012 study found that the link between sugar consumption and obesity has been found in only a few studies, and those have been limited to sugary drinks and foods containing sugars. The researchers say that there’s a lack of information on glycaemic responses in children and call for more research on the effects of carbohydrate intake in early childhood.

The Problem with Prevalence
Diabetes is often measured in prevalence, which is the number of people with the condition at any time. Incidence rates, though, give an idea of the number of new cases over a given period, which would be a more meaningful indicator for our purposes. In the case of the US, the CDC (Centers for Disease Control and Prevention) estimated that the age-adjusted prevalence of diagnosed diabetes increased by about 3 percentage points between 2000 and 2018 to reach about 9.1%.

However, after an increase in new cases from 2000 to 2008, the incidence rate of diagnosed age-adjusted diabetes settled at around 6% in 2018. This means there’s now the same number of new cases of diabetes per year as there was in 2000, indicating that it’s not becoming more common.

This is also reinforced by a falling death rate from diabetes. Remember, the US consumes about 63kg of sugar and sweeteners on a per capita basis, which is not insignificant. So, rather than an increase in diabetes cases, the increasing prevalence in the US seems to be caused by better health outcomes for those diagnosed with diabetes, meaning they live longer.

Socioeconomic Factors
There’s a myriad of other factors implicated in health outcomes related to Type 2 diabetes in addition to sugar consumption. One of these is gender. Several studies have shown that men in the UK are more likely to be diagnosed with Type 2 diabetes than women. Men do eat more sugar in absolute terms than women – they tend to eat more of everything due to higher energy requirements. However, research published in the British Medical Journal showed that, in terms of sugar’s contribution to total energy intake, women actually exceeded men by about 3.5%. If sugar is the cause of Type 2 diabetes, then why are men at higher risk than women?

Another factor to consider is age. A massive study conducted on beverage intake across 187 countries found that, for fruit juices and sugar-sweetened beverages, consumption drops with age. This held true across genders and across high, low and middle-income countries.

Togo, Uganda, Mozambique, and Lesotho all have high levels of physical activity and correspondingly, marginal prevalence of Type 2 diabetes of below 4.5%.

Conclusion
Until now, the sugar and health story has been disseminated rather simplistically. The body’s a sophisticated machine consisting of complex systems such as the metabolisms that are not yet fully understood, and a number of factors can contribute to someone developing a condition such as Type 2 diabetes. Even within the scientific community, there’s lack of consensus over the relationship between sugar and health. Some argue that dietary sugar consumption up to 80% of total energy intake is innocuous, and that policy should instead focus on more active lifestyles. However, others say that you can’t outrun an unhealthy diet.
It’s difficult to paint an accurate picture of Type 2 diabetes and sugar’s role in its progression. But one thing is for sure: no one factor, even sugar consumption, is solely to blame for Type 2 diabetes. This means Government policies that target sugar consumption in isolation to improve health outcomes may not have the desired effects.