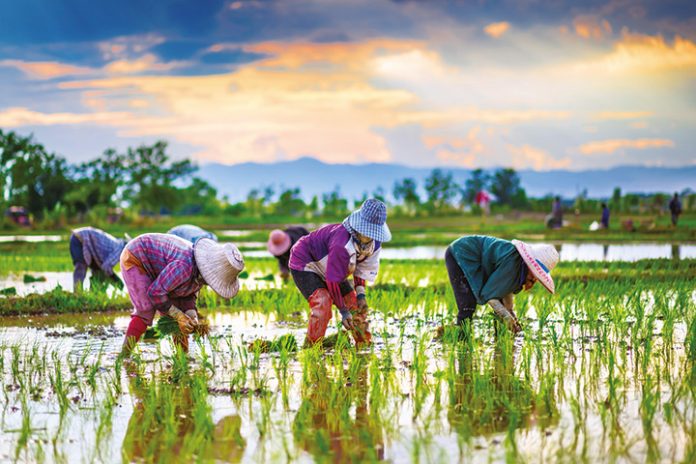 Indian agriculture needs to stop being “obsessed” with the land productivity and instead start worrying about water productivity, says a report released by the National Bank for Agriculture and Rural Development (NABARD) this week.

Titled Water Productivity Mapping of Major Indian Crops, the report is part of a research project with ICRIER, mapping a water atlas for ten major crops — rice, wheat, maize, red gram or tur, chickpea or channa, sugarcane, cotton, groundnut, rapeseed-mustard and potato. These together occupy more than 60% of the country’s gross cropped area.

Given that Indian agriculture uses almost 80% of all the country’s water resources, which are increasingly under stress, changing the objective of agriculture development to increasing productivity per unit of water, especially irrigation water, is crucial, says the report.

Water guzzlers
The most stark differences between land and water productivity are seen in rice and sugarcane cultivation, the report says. Punjab reports the highest land productivity for rice, producing four tonnes per hectare. However, it only produces 0.22 kg of rice for every meter cube of irrigation water. Jharkhand and Chhattisgarh, on the other hand, produce 0.75 and 0.68 kg for the same amount of water. However, low irrigation coverage results in low land productivity in these States. Jharkhand has only 3% of its land under irrigation.

For sugarcane, another water-guzzling crop, Tamil Nadu reports the highest land productivity, producing 105 tonnes per hectare. Karnataka, Maharashtra and Andhra Pradesh also have high rates of land productivity. However, all four States in the water-stressed sub-tropical belt have an irrigation water productivity of less than 5 kg/m3. In fact, an average of 40 rounds of irrigation are needed in Tamil Nadu. In the Gangetic Plain States of Bihar and Uttar Pradesh, on the other hand, need five and eight rounds of irrigation respectively.

The report recommends that cropping patterns be re-aligned to water availability, using both demand and supply side interventions. With water and power subsidies skewing cropping patterns, it also recommends reform in these areas, with a shift from the price policy approach of heavily subsidising inputs to an income policy approach of directly giving money farmers on per hectare basis. Pprices will then be determined by market forces.