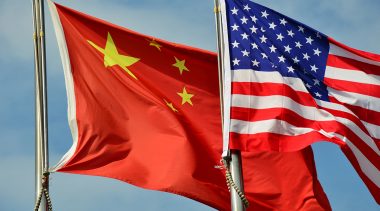 Washington, Dec 16 (AFP) Though markets are on edge and the arrest of a top Chinese executive threatened to spark a crisis, there are signs the US-China trade war can be resolved without further collateral damage to the global economy.
The whole world is watching the talks between Washington and Beijing, hoping a 90-day tariff truce will hold and the sides can end a dispute that threatens hundreds of billions of dollars in trade.

In recent days the small signs of progress, and perhaps more importantly the absence of new threats from President Donald Trump, have cheered investors worldwide, reversing some of the bloodletting that erased all of 2018 gains on Wall Street.
And the arrest in Canada of a senior Huawei executive amid US charges the company violated sanctions on Iran raised fears the renewed tensions could disrupt the talks — but so far this does not seem to have happened.

“What is clear is that both President Trump and the Chinese are trying to separate the issues,” said Edward Alden, a trade expert at the Council on Foreign Relations.
In fact, Beijing on Friday announced that starting January 1 it would suspend the additional punitive tariffs on US autos imposed in retaliation for Trump’s tariffs on China, cutting them to 15 per cent from 40 per cent.
And the talks last week produced reports the country would restart purchases of soybeans from American farmers and ease investment rules for US companies.
“China wants to make a big and very comprehensive deal. It could happen, and rather soon!” Trump tweeted on Friday, applauding the decision on car tariffs.
The ceasefire began after Trump met with Chinese leader Xi Jinping in Buenos Aires on December 1 and agreed to hold off on further tariffs or retaliation at least until March 1.

That means Trump will hold off on plans to more than double import taxes on USD 200 billion in Chinese goods at the start of the year and will also refrain from imposing tariffs on the remaining USD 246 billion in Chinese products the United States imports each year.
Trade experts and observers agree the timeframe will not allow for a comprehensive trade pact between the world’s two biggest economies.
Instead they say they hope to see a deal to roll back the tariffs and continue negotiations on the Chinese policies that have long been irritants to relations with Washington: forced transfer or theft of American technology, restrictive investment rules and industrial subsidies.

“You can’t solve every problem with China in 90 days, but progress could be made institutionalizing” changes to Beijing’s policies, Jake Colvin, vice president of the National Foreign Trade Council, told AFP.
But he cautioned that both sides “need to figure out a path to a win-win outcome. They both need to be able to say they gained something.” US Trade Representative Robert Lighthizer is leading the negotiating team, which includes Treasury Secretary Steven Mnuchin and White House trade advisor Peter Navarro.
“The basic problem here is that the United States and China don’t trust each other,” Alden told AFP.
“The best hope is a partial deal that addresses some of the US concerns and then the negotiations to continue while the progress is closely monitored.”
Navarro, an anti-China firebrand, last week warned that US negotiators would hold “tough” with China, and said the key would be to “trust but verify.” But he also cautioned against watching day-to-day reports instead of focusing on March 1, “when we’ll have a complete offer from China.”

Ironically, that would put the two sides essentially back where they started before Trump took office. Washington and Beijing had for over a decade conducted regular trade negotiations to resolve disagreements, and when progress was slow — a frequent complaint — or talks failed, the United States filed complaints with the World Trade Organization.
But Trump, who uses uncertainty as a core negotiating strategy, jettisoned diplomacy and went straight to hardcore tactics. He takes credit for bringing Beijing to the table and for raising USD 11 billion in tax revenue from the tariffs.
However, he seems to ignore the fact the taxes were paid by US businesses and consumers, not by China, and the trade battle already has had an impact on the US and Chinese economies, in addition to stock markets.

Still, the fact that Trump put Lighthizer — a veteran of 1980s trade talks with Japan — in charge of the negotiations is seen as a good sign.
“Bob Lighthizer is the only serious trade negotiator this administration has,” Alden said. “And there is more substantive progress in the past two weeks than there was in the previous two years.”