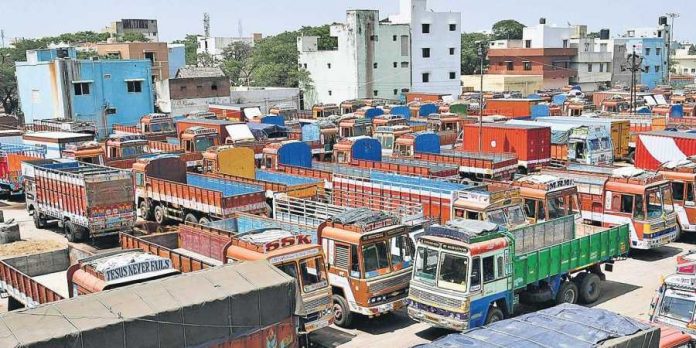 Industry bodies have also appealed to the Centre to end the strike as local industries are being affected due to difficulty in movement of finished goods and raw materials, with many units stopping production and laying off workers.
The indefinite strike, called under an umbrella body of All India Motor Transport Congress with a slew of demands, including reduction of diesel prices, enters its fifth day today.

“Movement of raw materials and finished goods have got hit. Export orders expiring, which is affecting our prestige in the international markets,” president of Gujarat Chamber of Commerce and Industry, Shailesh Patwari said. “Exporters have a major issue as they are finding
it hard to comply with orders and orders taken for ceramics, pharmaceuticals, chemical and textiles are expiring. Foreign competitors will benefit at our cost,” Patwari said.

Workers are also getting laid off due to lack of activity in the industrial units, he said. In a letter to Union Transport Minister Nitin Gadkari, Saurashtra Oil Mills Association (SOMA) said “local industries in Saurashtra region are entirely dependent upon transporters for availing raw materials and dispatch of finished goods.””If some sort of consensus is not arrived soon, the situation of industries will become very precarious, as they are already facing a tough time”, it said. Mukesh Dave of Akhil Gujarat Truck Transport
Association said that nearly 75-80 per cent of around 9.3 lakh vehicles in the state are off the road due to strike.

“Around 75-80 per cent of small and big trucks are off road. However, we have not forced trucks carrying essential items to stop operation as this will affect
common man,” Dave said. Among their demands, striking truckers want diesel to be under GST so that its price can be reduced. They are also miffed at high insurance premia and want a reduction in third-party premium, exemption on third-party premia from GST.
Apart from this, they are pressing for exemptions and abolition of indirect taxes, national permits for all buses and trucks and also doing away with the direct port delivery tendering system.