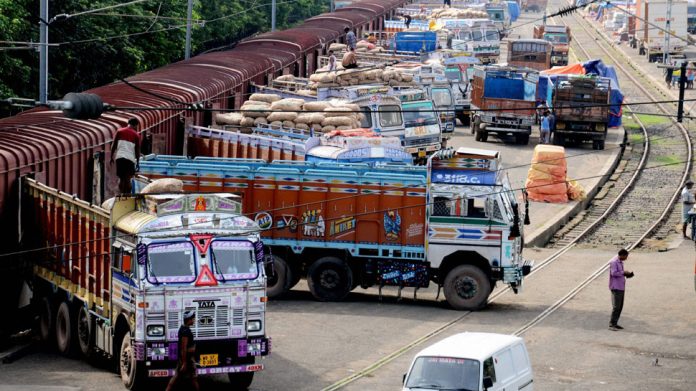 The nationwide transporters’ indefinite strike, called by All India Motor Transport Congress (AIMTC), received mixed response from various parts of the country on the fifth consecutive day today.
AIMTC, which claims support of 93 lakh truckers, started a nationwide indefinite strike on July 20. Their demands include a reduction in central and state taxes by getting diesel under the GST so that price of the deregulated commodity can be reduced.
“Today is the fifth day of the nationwide chakkajam. The government is still oblivious and its insensitive attitude … is fuelling the movement…The transport sector loss stands at about Rs 20,000 crore in last four days,” AIMTC Core Committee Chairman Bal Malkit Singh said.
He said the AIMTC has urged the government’s intervention for tangible resolution of the issues.
Essential commodities have been kept out of the strike.
The Indian Foundation of Transport Research and Training (IFTRT), however, said: “The trade, commerce and industry is so far unruffled by so called chakkajam” which has only partial impact in some parts.
Apart from demanding reduction in diesel prices, truckers are also against the “flawed and non-transparent” toll collection system that favours road concessioners and alleged that the time and fuel loss amounts to up to Rs 1.5 trillion annually on account of it.
Truckers are also miffed at high insurance premia and want a reduction in third-party premium, exemption on third-party premia from GST.
Apart from this, they are also pressing for exemptions and abolition of indirect taxes, national permits for all buses and trucks and also doing away with the direct port delivery tendering system.
BAL