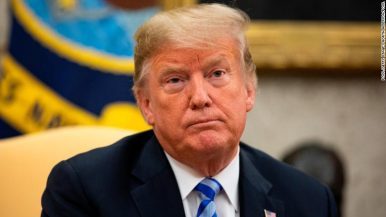 Washington, Sep 18 (PTI) US President Donald Trump on Tuesday slapped 10 per cent tariffs on USD 200 billion worth of Chinese imports and the duties will rise to whopping 25 per cent at the end of the year, escalating the trade war with the world’s second largest economy.
The tariffs on USD 200 billion worth of products comes on top of the USD 50 billion worth already taxed earlier this year.
The next wave of tariffs, which are scheduled to go into effect on September 24, will start at 10 per cent before climbing to 25 per cent on January 1.
The staggered increase will partially reduce the toll of price increases for holiday shoppers buying Chinese imports in the coming months.
Alleging that China has been unwilling to change its unfair trade practices, Trump said the new additional tariff structure would give fair and reciprocal treatment to American companies.
“Further, if China takes retaliatory action against our farmers or other industries, we will immediately pursue phase three, which is tariffs on approximately USD 267 billion of additional imports,” Trump warned.
After a thorough study, the US Trade Representative (USTR) concluded that China is engaged in numerous unfair policies and practices relating to United States technology and intellectual property – such as forcing United States companies to transfer technology to Chinese counterparts, Trump said.
These practices plainly constitute a grave threat to the long-term health and prosperity of the United States economy, he added.
“For months, we have urged China to change these unfair practices, and give fair and reciprocal treatment to American companies. We have been very clear about the type of changes that need to be made, and we have given China every opportunity to treat us more fairly,” he said.
“But, so far, China has been unwilling to change its practices,” he said.
China, he said, has had many opportunities to fully address US concerns. “I urge China’s leaders to take swift action to end their country’s unfair trade practices,” Trump said.
The US has already levied tariffs on USD 50 billion worth of Chinese products. Beijing responded with measures targeting USD 50 billion on American goods, raising fears about damage to the American farm industry.
Some administration officials have pushed for additional talks with China. But Trump contended last week that the US was under “no pressure” to reach an agreement.
China’s foreign and commerce ministries have said Beijing would hit back if the US moved forward with tariffs.
But Trump said he hopes the situation will be “resolved, in the end, by myself and President Xi [Jinping] of China, for whom I have great respect and affection.”
Economists warn the tariffs could chip away at economic growth in the US.
A senior administration official told reporters that China has had many opportunities to change those practices.
By imposing such a tariff, the official said, the US is not trying to constrain China’s growth.
“We have no problem with China trying to grow its economy, trying to lift its people out of poverty, that’s a good thing. But, in doing so, they can’t take actions that deliberately discriminate against other countries; actions that hurt American workers. And they can’t take actions that entirely flout the rules of the international trading system,” the official said.
“But this is an effort to work with China and say, it’s time that you address these unfair trading practices that we have identified, that others have identified, and which have harmed the entire global trading system,” the official asserted.
At the same time, the official said, the US remains open to negotiations.