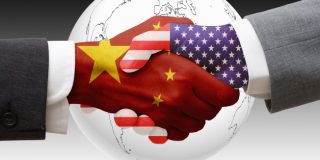 Washington, Nov 16 (PTI) US President Donald Trump on Friday said he thinks there will be a trade deal with China, reiterating that he wants a deal which is fair and on a reciprocal basis.
Trump’s statement came ahead of his meeting with his Chinese counterpart Xi Jinping in Argentina later this month.
The US President kicked off the trade war in June by slapping additional tariffs on billions of dollars of Chinese exports, piling up pressure on China to reduce over USD 335 billion trade deficit in USD 710.4 billion bilateral trade.

“We have tariffs coming in on USD 250 billion worth of goods and we’re talking about billions and billions of dollars a month will flow into our country, and has already started flowing into our country, that comes from China,” Trump told reporters during a news conference.
“So China’s never been put in this position, and I don’t want to put them in a bad position. I want to put them in a great position. But it’s called reciprocal. We have to have reciprocal trade. We can’t have trade that’s meant for stupid people. And that’s the way they took advantage of our country. And we don’t have that anymore, and they understand that,” he said.
“I think a deal will be made. We’ll find out very soon,” Trump said in response to a question.
China has sent to the US a list of 142 items which they are willing to negotiate. That’s good, he said.
“China wants to make a deal. They sent a list of things that they’re willing to do, which was a large list. It is just not acceptable to me yet, but at some point, I think we are doing extremely well with respect to China. I have a great respect for President Xi. I have a great respect for China,” Trump said.

Trump alleged that China has taken advantage of the United States for many, many years.
“I think that they’re going to come in, and we’re going to either open up China and make it fair, because it’s not fair right now. They do very little business with us, and we do a lot of business. It, you know, it’s just can’t be. Plus they have tremendous barriers. They have tremendous tariffs on us that we didn’t have on them,” he said.
But that’s all changed now, the President said.
“The US has put on tariffs on USD 250 billion worth of goods and we have another USD 267 billion to go if we want to.
“We may not have to do that. China would like to make a deal. Our country has done very well, and China, as you know, has not done very well. They’ve been down 30 per cent, 32 per cent and they’ve been down very substantially,” Trump added. PTI LKJ CPS