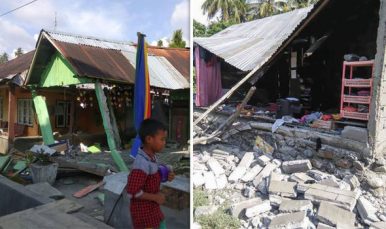 JAKARTA: On Friday, a major earthquake of 7.5 struck off the Indonesian Island of Sulawesi, causing authorities to give alerts over Tsunami as another quake caused after brought down infrastructure in the same area.The alert was lifted within an hour but officials asked people to stay prepared as a number of moderate aftershocks hit

Sutopo Purwo Nugroho, the spokesman for the National Disaster Mitigation Agency, said, “We advise people to remain in safe areas, stay away from damaged buildings,”
“The (second) quake was felt very strongly, we expect more damage and more victims,” Nugroho told.
The U.S. Geological Survey put the magnitude of the second earthquake at a strong 7.5 of magnitude, after first saying it was of 7.7 magnitude
The earlier quake destroyed some houses, killing one person and injuring at least 10, according to authorities.