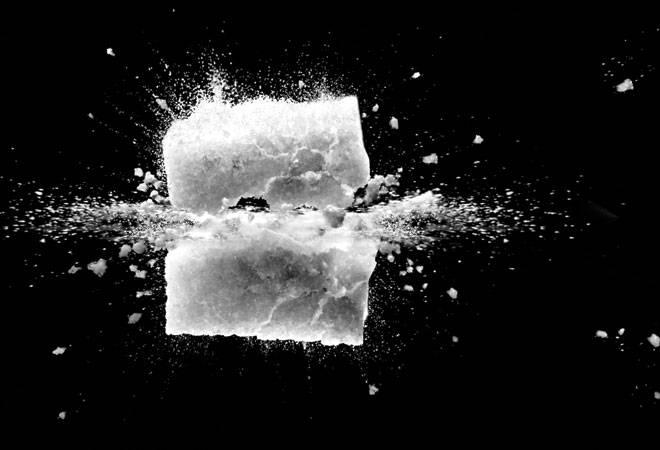 The domestic sugar industry with its 530 operational sugar mills that produce 25 million tonnes (MT) of sugar and in the process pays Rs 65,000 crore as sugarcane price to 50 million Indian farmers every year, is not in the pink of health. Half of the 54 Indian sugar companies, whose financial figures (for FY 2017) reflect in the corporate database Ace Equity, have an interest coverage ratio lower than 1.5, the generally accepted safe level when it comes to a company’s ability to service interest costs. Over 20 of them have a debt to equity ratio higher than 2, which, again, reflects a not-so-healthy balance sheet.

These revelations should be of concern to the industry, the government and the sugarcane farmer today. Here’s why. The country’s sugar production is estimated to set a new record during the current sugar season (October 2017 – September 2018). The surplus stock is already pulling down sugar prices, indirectly impacting revenues of sugar mills. The arrears that sugar companies owe to farmers are also piling up – the latest count being approximately Rs 15,000 crore. The weak financial position of sugar companies, as projected by Ace Equity, makes the situation gloomier.

Ajay S. Shriram, Chairman and Senior Managing Director, DCM Shriram, an integrated player in the sugar sector, says in the last two months, his company had to write down the value of its sugar stock by almost Rs 65 crore. “The selling price of sugar has been going down. We don’t know what it will be by March 31, when a view will be taken for the full year,” he says.

If DCM, one of the healthiest companies in the Ace Equity list, is feeling the heat, one can imagine what the industry situation in general is. Especially since most sugar mills are managed by privately-held and cooperative entities across the country.

The Indian Sugar Mills Association (ISMA), the apex body of sugar manufacturers in the country, says that sugar mills are running at peak capacity and the sugarcane price payable to farmers is building up. “With the declined trend of ex-mill sugar prices, which is around Rs 3,000 per quintal in the Western part and `3,200 per quintal in the Northern part of the country, mills are incurring losses of about Rs 500 per quintal over their costs. This has led to difficulties in the payment of cane price to the farmers,” Sanjay Banerjee, ISMA’s spokesperson says. Sugar production in the current season, he adds, is about 4.5 MT more than the estimated consumption.

Rating agency ICRA corroborates the ISMA view when it notes that sugar production is likely to set a new record by touching 29.5 MT in sugar year 2018 (SY 2018) and likely to outstrip consumption by around 4-4.5 MT. Sugar mills are expected to face pressure on sugar prices and profitability in the near term, which, ICRA warns, will in turn exert pressure on sugar mills’ debt coverage metrics and adversely affect liquidity indicators, including cane payments.

Why is the sugar industry so sensitive to sugar prices? The primary reason is that, unlike other industries, political considerations, and not economics, are what drive this sector. With 50 million sugarcane farmers, political parties always want high sugarcane prices; they also want low sugar prices to gratify the end customer; and also a viable industry. But the three scenarios can seldom coexist. “The government fixes the fair and remunerative price (FRP) of sugarcane. An assured and attractive return incentivises farmers to produce more. The sugar mills have no choice but to crush the whole produce, which, in turn, exceeds demand, thereby impacting the prices. We have a problem here,” says Tarun Sawhney, Vice Chairman and Managing Director of Triveni Engineering and Industries, yet another strong, integrated player in the sugar sector.

Incidentally, FRP, fixed by the central government, is not the price that companies may finally end up paying to the farmer. Because, the state governments fix their own price, the State Advised Price (SAP), for sugarcane, which is higher than the FRP. Shriram of DCM Group calls it SAPP – state advised political price.

Roughly five years ago, India was faced with a peculiar situation: cane prices kept rising – not FRP, but SAP – and became irrationally high without any correlation with any return to the farmer or with the sugar price. What followed was mounting arrears to the farmers for 18 to 24 months. But despite the indefinite delay in payments, farmers continued to produce sugarcane for two reasons – the money that was fixed by the government was still highly lucrative as compared to other crops; and secondly, they knew the money would come since they were not dealing with local mandis, but organised sugar mills that couldn’t have run away without paying the arrears. Governments, Central and state, would find payment arrears too sensitive a problem, given the number of farmers involved. Although the government did intervene by announcing relief measures, it was a big wake-up call for all stakeholders.

Suggestions that propose linkage of sugarcane price to the factory price of the processed commodity are aplenty. The Rangarajan committee, constituted by the previous UPA government, had even laid out a mechanism that could streamline farmers’ compensation to provide a minimum guaranteed price within a very short time and a market-linked bonus at a later stage. However, no state government has accepted it in its entirety.

For the short term, there are several measures being initiated by the government; some are in place, others are being planned. For instance, the Central government recently increased the import duty on sugar and brought in a monthly release quota for sugar mills to avoid panic selling by mills. It is also planning to allow exports to help sugar companies reduce their stockpile. Easier said than done, believe industry experts. That is because the international price of a kilo of sugar is approximately Rs 10 less than the domestic price. Someone needs to cushion the loss.

“There was an outstanding scheme introduced by the Narendra Modi government in which farmers were paid the money that mills owed them on the basis of the quantity of exports the mills made,” Sawhney says. “It wasn’t a subsidy to the industry, but the government helped us liquidate our excess stock to some extent and, in the process, helped stabilise domestic sugar prices,” he adds.

As Ace Equity data indicates, financial weakness also means that the ability of sugar companies to raise debt is limited. Sawhney says the industry has always sought support from the Indian banking industry to survive. “When banks are withdrawing from such an important industry, which is considered even today as an essential commodity, it is time for some sort of structural intervention from a financing perspective. How do you expect the industry to support 50 million farmers if banking support is offered to a small portion of the industry? If there is pain, it will not be at the milling level and the farmer level. It is untenable socially and politically, and it is not a desirable situation for the industry either,” he states.

One solution could be making sugar a priority lending sector, but that may misfire as banks are already saddled with NPAs.

Another solution is to reduce the dependence of companies on sugar production. Depending on the demand situation, they should be in a position to convert sugarcane into ethanol. But to make it a sustainable and attractive alternative business proposition, there needs to be predictability in the country’s ethanol policies and pricing. Power generation using cogeneration technology is another option through which companies can generate revenues by selling extra electricity generated as a byproduct of sugar production to power distribution companies.

However, having a remunerative sugar price is the easiest of all measures.

“The government realises very well that the industry has gone through a very difficult time. There may be aberrations; some may feel the pinch too much, some others to a lesser extent. Hopefully, things will not go out of control once the realisation of a decent sugar price happens,” says an optimistic Shriram.