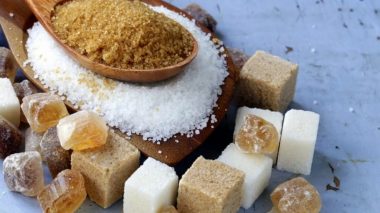 Lucknow, Sep 16 (PTI) Allaying fears about the sugar industry, Uttar Pradesh Cane Development Minister Suresh Rana said better management by the Yogi Adityanath government has resulted in the state accounting for 38 per cent of the entire sugar production in the country.

The state produced 32 million tonnes of sugar in the 2017-18 season (October-September), which comes to 38 per cent of the entire sugar produced in the country, the minister told PTI Sunday.
“It is a matter of pride for the state that Uttar Pradesh accounted for 38 per cent of the total sugar produced in the country,” he said in an interview.
Stressing that the sugar industry in the state is on the right path with the Yogi Adityanath government initiating all-round steps for the welfare of the sugarcane growers, Rana said that crushing by the mills has gone up considerably under the BJP government.

While it was 82 crore quintals in 2016-17, it rose to 111 crore quintals in 2017-18, the minister pointed out, adding that the area on which it is grown is also likely to go up by around five lakh hectare.
“It is the management of the chief minister that crushing has been ensured smoothly, extending a huge relief to the growers…three closed mills have been revived during this period to facilitate crushing,” he said.

On the long-standing problem of continued cane arrears, the minister pointed out that it is for the first time that such a major step has been taken by any state with the government ready with a package of Rs 5,535 crore for it.
This includes the cane dues of both cooperative and private sector, he said, adding that the state government will provide Rs 1,010 crore to cooperative mills and Rs 500 crore to private mills for direct payment of cane dues.
Another Rs 4,000 crore will be made available through a soft loan to private mills for clearing cane payment, he said.
The modality of the soft loan is being worked out to facilitate payment by mills, which feel constrained to make payments, but the only condition is that the it should go directly in the accounts of the farmers, he said.

On the recent political furore arising out of Yogi Adityanath’s suggestion to sugarcane growers during his visit to Baghpat recently that they should explore growing other crops as sugar causes diabetes, Rana said that it has been wrongly interpreted by political adversaries.
“What the chief minister wanted to say was that even cane farmers should look for other crops that can be grown alongside to increase their income,” he said.

Rana lashed out at Samajwadi Party president Akhilesh Yadav for his tweet – “BJP is already facing anger from sugarcane farmers for not clearing their dues. Now, Adityanath has added fuel to the fire by saying that excessive sugarcane production leads to diabetes. However, he should be telling
his supporters to not spread hatred and violence in the society”.

Rana said the SP chief has no moral right to speak on the topic.
Adityanath’s suggestion also drew flak from senior SP leader Azam Khan, who has termed the chief minister’s statement as “foolish”.
“Instead of encouraging cane growers, the chief minister is saying that farmers need to stop growing sugarcane …this only proves how the people have been befooled…it reflects the seriousness of the BJP government towards farmers,” Khan has said.